Heavy Down, Gentle Up: A Beginner-Friendly Brush Lettering Tutorial By now you’ve probably noticed, brush lettering is ‘in’ right now. It’s everywhere from store signage to band posters to Pinterest ready quotes. If you love the look of brush lettering and modern calligraphy, but have no clue where to start, here’s a couple beginner-friendly tips for you to play around with.

For inspiration look at what other people are doing (like how they do that tricky letter), try it, then try it some more. With enough practice you can totally get a style of your own – and have fun doing it!

And if you’re really in to advancing your brush lettering skills, check out Laura Worthington’s Brush Lettering Basics. As much as the lettering tips themselves are amazing, the composition modules like ‘Putting together a finished piece’ will help you create designs that feel professional and complete.

Lettering is so much more than just the letters – composing a full design is often a bigger challenge than forming the letters. With that said… here’s some beginner tips that’ll give you a running start! See that zig zag right there? Practice that, over and over. The thick downstroke and thinner upstroke that brush lettering is known for comes from varying pressures. Press down heavier when you are making a downstroke, and lighter on your upstrokes and flourishes. Practice it, aiming for downstrokes and upstrokes that are the same weight as each other. If you’re only used to writing cursive with a standard pen, you will naturally not account for the thicker downstroke. Overcompensate with spaced out letters until you’re comfortable with the spacing. The baseline that is. If you imagine your lettering is on a lined piece of paper, play around with dropping the baseline on a couple letters. It’s a fun exercise and can help you define your own style- where do you like those drops? Where do you definitely not like them? Maybe you prefer standard height lettering with no drops? You’ll never know until you try!

If you found these tips helpful, or even just had fun playing with them- we’d love to see! Share your practice with us on social tag @creativelive and @colleenpastoor 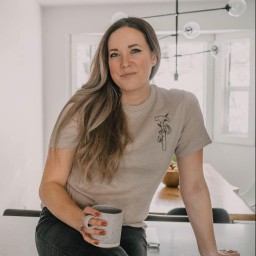 Colleen is a wife, Mama to 23 month old twins, and the DIY and lifestyle blogger behind Lemon Thistle where she shares printable art and hands on tutorials for DIY home decor, parties and gifts.