How To Know if Your Idea is a Good One New ideas are what creative people are made of. As creative professionals, we are constantly grinding our brain-wheels to consider new ideas and new ways of seeing the world. “What if” is just the way we think, whether it’s while baking cookies with kids or brainstorming in an office meeting. But what if (see! I did it again) the very thing that makes us successful is the thing that will sabotage our success?

Creativity—it’s awesome, but it can also cause a flood of dangerous “what-ifs” that derail when new ideas really deserves the spotlight. The key to real success is constancy and commitment, leveled by a strong sense of honesty. You don’t have to be so dedicated to this idea that you let it kill you (it’s okay to abandon ship when all factors point to failure) but it’s important  to give an idea a fighting chance to succeed.

Why do great ideas fall away from us? Because it’s hard to recognize a good one sometimes!

Do you have a big idea that feels so great, you think you want to dedicate the next chapter of your life to it? Spend a few minutes and ask yourself these questions to know if your idea is worth pursuing.

What has been your friends’ reaction when you’ve told them about it?

You’ll never get new ideas off the ground if you can’t be a good listener and take in the crucial feedback. You need a community to help you make sense of incoming feedback from the outside world  and be the foundation for how you spread the word about your new idea.

Publishers will often look at new authors in terms of not only how good their manuscript is, but also how good their “platform” is. Book publishers are businesses, not libraries. They want to know gauge  how much of an audience you already have. Think about this as you become your own “agent”. Will your family, friends and social network help you deliver your idea to others?

How good are you at sticking to things?

Not your gym equipment. I mean sticking to ideas. Are you good with commitment and focus?

Recently, I watched a documentary about Shepard Fairey, the renowned street artist who created the iconic HOPE poster during the Obama campaign. I watched with open-mouthed awe as the documentary revisited him in the early 90s, placing André the Giant stickers all over town, watching as they became locally recognizable, and then downright iconic.

Fairey continued to make stickers, and posters, and stencils with every new slogan and angle he could think of. To this day, the man is grown up and world-famous, and is still building on the original concepts and craft that he established over twenty years ago.

That’s dedication, Creatives. He even admitted he didn’t know if the idea was great or not, and still doesn’t admit that it’s particularly “good.” He is just dedicated to making it good, and making art that mattered.

Are you willing to stick with it when times get hard?

Where did your idea come from?

Ideas do not come from thin air. In fact, context is everything when it comes to ideas. No one can really say if your concept has merit, unless they are given an entrance into your thought process, to connect the same dots you did.

For example, my big idea a few years ago was to work with a friend who shared my vision and remake a dark, deserted alley in our city to become a new street arts destination. Depending on where you live, that might sound like a fairly ordinary idea, because perhaps you live somewhere like Philadelphia or Miami, where mural art is ubiquitous and frequently tied to economic success. The difference is that my friend and I live in Milwaukee, where “graffiti art” was typically frowned upon, and where most artists in the area did not practice as street artists or muralists. We knew this was going to be a tough idea to get off the ground, especially at the scale we were envisioning. What did we do to remedy this? We put together the story of why this was a great idea. We told our local aldermen, building owners and commercial tenants about other cities’ art corridors, and how these designated art areas positively contributed to the cities growth. It was only by sharing these issues and openly connecting the dots for potential supporters that we were able to open doors for people, and help them understand our idea, in way that was more fundamental than what it might have appeared to be at first glance.

Don’t get overwhelmed by your new ideas. Be flexible, listen to feedback, and be honest and genuine all along the way.

Have a creative idea but don’t know how to sell it? Tune into Stacey Williams-Ng to learn how to get your ideas the attention they deserve! 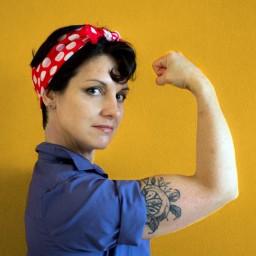 What do you do when you hit a creative block? That soul-crushing moment when you hate everything, and all your…