On Location with Miss Aniela: One Model’s Story Jagged rocks that would impale any unfortunate soul who fell on them. Wild winds that could choke your throat in black sand and send any navigator off course. Snow storms that are conjured from the skies in just milliseconds blinding any distance beyond an inch. And a deathly cold climate that can cruely kill…this is the country called Iceland.

It was just six weeks before April twelfth when an email I received had me jumping for joy. Referring to me as a ‘hardy model‘ worthy of adventure and brave enough to take on the cold, I jumped at the chance to model not only in a location that oozed raw potential but for a photographer and true artist whose career I’d been following for ages.

It was February 2011 when I began modelling and I was shown a behind the scenes video for inspiration. It was the Miss Aniela duo of Nat and Matt working at Weston Park, shooting models in full eighteenth century Marie Antoinette costume. It was the first behind the scenesshowreel I’d ever seen and I knew in that moment that my new big ambition was to be a part of that world. I wanted more than anything to experience the industry and to one day meet this creative team.

As I discovered more and more about the world of photography, I was pointed in the direction of Model Mayhem; a website designed for forum use and casting calls. I would trawl through shoot castings day after day and occasionally some of Miss Aniela’s would show up. I applied for all that I saw but it came as no huge surprise that I was never selected for her productions.

Rejection is a huge part of the modelling/photography world and anybody willing to be a part of it, must be toughened up to the reality of not always winning every battle. As a non-agency signed girl with a fairly average look, I presumed I wasn’t their type of model but continued to openly enjoy what they created from afar.

Fast forward to March 2014 when a shocker of an email arrived. The breath fell from my lungs with elation to learn that I’d be flying to Iceland in just a few weeks to join the one and only Miss Aniela and her team! She and and a group of budding photographers were off to the land of ice to shoot extreme fashion on extreme locations. Without a seconds thought of hesitation, I’d booked my flight. Never in all my life have I worked in such an insane yet captivatingly beautiful but most certainly crazy of places. The weather changes from sun through to snow every few minutes and the landscape is so vast and unique that it’s hard to believe that any living thing can survive. The place is epically alluring and the sheer unfamiliar nature of the land had my bones tingling with curiosity instead of the cold.

Nat and I layered up on location, taken by Isaac Hall: To go from one place to the next was like travelling in time from planet to planet. I had to nip my senses back on several occasions thinking; never have I experienced anything so close to teleportation as this, for there was no way we were actually driving to new worlds so easily, each so different from the last. Upon my mossy bed taken by Almost Never Black and White Photography: With styling by the ineffably talented Minna Attala and make up by the delightful Grace Gray, the four models (myself included) were ferried from location to location with the determined photographers, all as eager to get ‘the shot‘ as each other. It became apparent more than ever just how important it is to scout your locations and to know the terrain of the land before bringing your team there to work. Through dedicated collaboration, our locations had been pre-selected by Miss Aniela and our hosts; ArcticOn – a brilliant production company led by Ao Thor. Between them we were treated to a host of locations with such incredible variation whilst being informed about the local history and interesting facts that I shall always remember. The ArcticOn team (whom we later nicknamed ‘the vikings’) went above and beyond to keep the group safe, warm, fed, watered and most importantly; experiencing the time of their lives with their cameras.

Bernard captures me being blown away in full Geisha costume by the waterfall, before falling into the arms of a viking; We were driven around Iceland in huge monster trucks by experienced drivers for whom I couldn’t have been more grateful. The prospect of driving through snow storms and volatile volcanic land is not one that my bowels really care for, nor the lack of civilisation with no knowledge of where to go. You see, it’s adventures such as these that allow me to appreciate being on board with a professional team. A team who plan their trips to within an inch of their lives are invaluable for safety as well as for getting the most from the experience where lives and expectations are concerned. I love relaxed rules and leeway in planning, but in a location such as this in the time frame that we had, I was so thankful for structure and organisation.

Cared for by experts who know the terrain, understand the tidal times, recognise the signs in the sky for the incredible Northern Lights approaching and are able to find the most epic of locations hidden from the view of public roads after months of scouting – these are the reasons I loved Iceland, the Miss Aniela way. ‘The Slow Disintegration of the Lonely Mind‘ by Ian Mears Rocking the road with my ‘fairy wings’, taken by Isaac Hall; Standing on the snow with bare feet and singing the Edward Scissorhands ice dance in my head, image by Chuck Toussieng; As always, the things I experience have left me with good lessons learnt. I learnt to never give up hope; if you don’t fit the bill for one casting then try, try and try again. Never toss your toys out of the pram if you fail, instead work harder for your reputation, for that will always succeed your ability. It was not my average build, average height nor average face, but my reliability, stamina and willingness to go the extra mile I believe is what brought me to Iceland.

More than anything, I have learnt that managing an international fashion shoot in a dangerous place is blooming hard work and that I appreciate everything that was provided for us! Keeping your team safe and respecting your models whilst remembering at all times that they are human is the absolute priority. Never endanger anyone on your team for ‘the shot’…remembering that sand sinks, cliff faces crumble, tides come in fast and ice is…well ice is slippery! Nobody can work in cold conditions for long periods of time and keeping that in mind when shooting your model will keep you in good stead for the rest of the shoot – never expect a model to do what you won’t.

As exhausted as we all were by the end of the week, we were sad to see it all end. Portfolios had been built, friendships had been made and irreplaceable experiences had been had. Once again it was the adventure of a lifetime and one I will never ever forget.

Behind the scenes at the iceberg lagoon brilliantly captured by Tim Matthews; The team, taken by Miss Aniela; 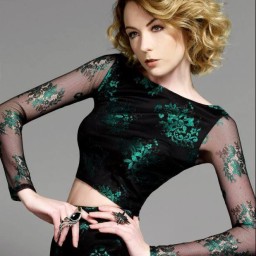 Lara Jade’s 20 Steps to Success As a Professional Photographer

What Modeling Has Taught Me About Photography