You may have seen Julie Jackson’s witty cross stitch kits floating around the internet. They feature snarky and sometimes crass sayings that are peppered with classically ornate patterns and the occasional inappropriate bear. But that’s not all that’s unique about her.

Julie has been her own boss since 1996, long before the word “entrepreneur” was part of our daily vernacular. Since then, she has launched two successful businesses, published three books — two on cross stitch and one featuring glorious photos of cats in wigs that I was lucky enough to help her promote. Julie is one of those people who has brilliant and wacky ideas and doesn’t hesitate to make them a reality — witness Kitty Wigs. I thought it would be fun to chat with her about inspiration and creativity.

What projects are you currently working on?

I just released a new book of 50 patterns called Subversive Cross Stitch: 50 F*cking Clever Designs For Your Sassy Side. Also, I worked with blueQ on four tins which have vintage-inspired embroidery printed on them. I’m currently creating new kits and PDFs for the website and scheming on ways to expand our reach and keep it fresh. We’re cooking up a new Tupperware-party-type craft night concept called Talk Shit and Stitch so that people can host stitching parties with our kits and make a little money doing so. Hoping to have that up and running by spring. Oh, and I just found out that the fabulous Debbie Stoller is going to do a Subversive Cross Stitch stitch-a-long soon on the Bust magazine website using one of my patterns. I’m really psyched about that, Bust is my original inspiration for starting Subversive. I’ve been a subscriber since they started. Where do you find inspiration when you are in a creative rut?

I usually draw eyebrows on our dogs when they’re asleep and that makes me laugh all day because they have no idea how funny their expressions are. I lurk a lot on Instagram and check out what’s posted with the #subversivecrossstitch hashtag. I love to see what people are doing out there, whether it’s stitching one of my designs or doing their own thing–it inspires me to see what people come up with since no two minds think alike. Also, it’s nice to see where things end up once they’re shipped – like with the books. We’re really working in a vacuum here, so I love to get glimpses of Subversive in real life. Also, Lost At E Minor and NotCot never fail to make me scream “NO WAY!” and Broad City always makes me aspire to be bolder and funnier. And music, lots of loud crazy music (and singing). Stitchery Tape. It’s an archival double-sided tape for needlework that allows you to mount your finished work to a board. It’s SO easy to use but hard to find, which is why we sell it on our site. Sometimes if I’m really lazy I can use that instead of ironing my finished cross stitch. And if I see someone posting photos of wrinkly cross stitch, sometimes I’ll just send them a roll to help out. First roll’s free. 😉 Who are your favorite makers and artists right now?

I’m always amazed and inspired by Matt and Emily at Steotch – we must have been separated at birth. Their work is much more ornate than mine but we have a similar sense of humor and have collaborated in the past. And I recently discovered Shannon at Badass Cross Stitch. She is doing some incredible things that are right up my alley. I also made the connection that most of the illustrated stuff I love from blueQ is by the same artist, Martha Rich. I love her style and am hoping to own a particular piece of hers someday. Best advice for people who want to start a creative business?

Do it! Don’t doubt yourself. You’re the only one who does what you do and there’s never been a better time to get in the game. Don’t put it off. You can always start on Etsy and branch out later if you want, it’s so easy to do these days. There are a million opportunities just waiting for you! 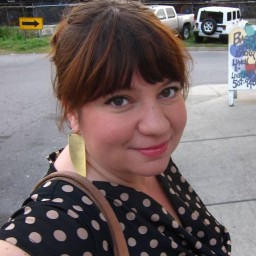 Christina Loff is the Channel Marketing Lead for Craft, Photo, and Design at CreativeLive. She's a crafter, book spy, and Jersey native.

I first met Rosalie Gale during the filming of her good friend Kari Chapin's class. I had so much fun talking…

Perfection Is Boring, Pinterest Is Fiction: How To Be OK With Ugliness

My favorite part of creative life is the mess of it. The experimenting, the thinking out loud, the times when…

7 Wedding DIYs That Look Hard But Are Actually Super Easy

You know those crafty people who just seem to be able to make anything by hand? It's ok if you're…

The Maker’s Guide to Merchandising from the Kitchen

Running a handmade business tends to ebb and flow around the needs for inspiration, product creation and of course maintaining…