Minutes from boarding a 16 hour flight in Istanbul to San Francisco I got a text from my friend Ann Rea.

Shivers went down my spine, goosebumps covered my body, my eyes filled with tears that wouldn’t stop — I immediately texted my Mom, Dad and Brother telling them I love them.

Ann had delivered terrible news. That Scott Dinsmore had died on Mt. Kilimanjaro. He was on a round the world trip with his wife Chelsea — doing what he loved — Traveling the world and creating a life he wouldn’t regret.

Lunch at a house made of mud, straw and rocks (I prefer to think sand castle) in an oasis, in the middle of Morroco, en route to the Sahara Desert to meet my camel. #DinsmoreWorldTourDay180

If you don’t know Scott  — you should. His mission was to change the world by helping people find what excites them. Check out his website and take time to get to know him.

I was lucky to meet Scott when I produced Ann Rea’s Fulfill Your Creative Purpose on CreativeLive.

“Scott Dinsmore was true a bright light, inspiring, kind and generous” Ann Rea reflects “I remember being in the green room with him when I warned him that my CreativeLive course that he was about to join was controversial. He said if you’re not doing something controversial you’re not doing anything that’s of much importance. He and I both escaped  the corporate cubicle to create a life and business that we loved. Although he was smarter than me because he didn’t stay in a place where he was unhappy for a very long. He went outside of his comfort zone, sought mentors, and walked his talk — inspiring people all around the world.”

He left for his around the world trip only two days after this appearance. At the time his words moved me and watching it now is overwhelming with the news of his death.

This exchange on the show was particularly poignant for me:

Scott: You just touched on the biggest risk in the history of the world. The risk that you regret you didn’t do it. That is how I run my life, my decision making process, everything. It’s not like you won’t fail because you will always fail, things won’t always work out, the best things happen that you didn’t plan.

Ann: Is that why you decided to go travel around the world? Because you’ll look back and you and your wife would have been really regretful if you didn’t go for it?

Scott: For Sure!! In 20 years, 30 years. I am 80 years old and I’ll look back wishing I wouldn’t have traveled around the world. I mean come on!

Sadly Scott didn’t live to be 80. He died at the age of 33. But he left his mark on the world. He had created a global community of people who refused to live mediocre lives and that community will continue after Scott’s death.

Scott’s mission was to bring people together and he did that:

“With the right people in your corner, any goal or resolution becomes nearly certain.” @_Scott_Dinsmore

“Environment is everything. Your friends can either kill dreams or inspire possibility. Choose wisely.” @_Scott_Dinsmore

Scott’s death is sad for so many reason — But it has inspired me to ditch my fears and make the most of every moment I have, knowing it could be my last.

“Death is our inevitable fate and ironically it can stop most of us from living fully.” Says Rea ”It’s Better to pass climbing Mount Kilimanjaro and touring the world inspiring others than to leave this earth getting a gallon of milk at the Safeway.”

Our lives are all hanging by a thread. We never know when our time is up — so make the most out of every moment. Call your family and tell them you love them, go and mend that broken friendship, tell the barista that you like their haircut, say hi to the person you catch eyes with on the street, leave that job you are not happy at. Don’t wait for next year to take that dream trip. Create that business or art piece that’s been on your mind. GO. NOW.

In honor of Scott, I invite you to do four things. Go read Scott’s favorite book “The Alchemist”, read Scott’s blog, reflect on what parts of your life where fear is causing paralysis and remember:

“People are capable, at any time in their lives, of doing what they dream of.” — Paulo Coelho, The Alchemist .

Sunrise in Cappadocia. The land where balloons replace cars and caves replace homes (we're sleeping in one). And tomorrow at 4:30am we take flight in one of those babies. #ballooning #Cappadocia #disconnect2connect 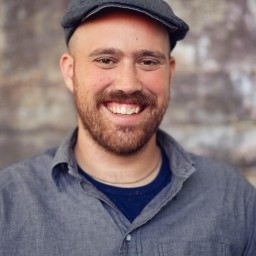 Justin is a content producer and change maker living in San Francisco. A 20 year vegetarian and huge fan of solution based education -- you can find him @justinbarkertv.