Cradled between the loving arms of the Golden Gate and Bay Bridge lies North Beach, home to world renowned artist Jeremy Fish. Since moving to San Francisco at age 19, Jeremy’s love for the city has bled through his art. Earlier this year, the Arts Commission took notice and asked Jeremy to give his touch to a special project. December 28th will mark the 100th anniversary of the reopening of the historic City Hall building in San Francisco and will feature 100 pieces of art drawn by Jeremy Fish over the course of 100 days, each representing a small piece of SF history. Jeremy will be the first Artist in Residence that San Francisco City Hall has ever had in its 100 years.

Jeremy Fish grew up in Albany, New York as an avid skater and visual artist. In the early 90’s, he packed his bags to further pursue artistry at the San Francisco Art Institute. You can easily recognize Jeremy’s art which revolves around his love of certain cities, animals, vintage cars, nature and the revisited theme of skulls and Silly Pink Bunnies (a callback to his long-time skate gang). In November of last year, some memory loss and dizziness led Jeremy to the doctor to discover he had an aneurysm in his brain. Two surgeries later and with a prescription to “chill”, Jeremy has spent 2015 making sure to water down his concentrated, caffeine-fueled work ethic.

CreativeLive: You seem to be keeping busy with art shows, where is your work hanging currently?

Jeremy Fish: I have some recent work hanging in Milan, Italy at the Antonio Columbo Gallery. A few unsold pieces at Blackbook Gallery in Denver, and these 100 drawings I finished recently at City Hall are also currently on Display. It was a very busy summer!

CL: Representing the 100th anniversary of SF City Hall is a big deal, how did the city approach you to handle this responsibility?

JF: Initially the good people at the SF Arts Commission inquired about having me do some posters to remind folks about City Hall turning 100 years old. They liked my sketches and concepts, and decided to make it a MUCH larger more involved project. From there we met and designed this residency project. The 100 drawings is partially because of the centennial birthday of the building, but also that the exhibition space at City Hall is huge, and needs a lot of work to fill it. The 100 days was really a result of a late start on the project due to some health issues and timing for me personally.

CL: You completed 100 drawings in 100 days, how much thought went into the content of each drawing? With such a quick turnaround time, what was your artistic process from idea to final product, and how different was it from your normal methods?

JF: The sheer volume of drawings [and] the time [limit] I had to complete them was a challenge – I tried to embrace as a limitation of the project. There was a book deal in place, so I didn’t want to just whip out quick sketches. I decided to collaborate with one of my oldest friends, photographer Rick Marr. I had done some tee shirt designs earlier this year where I drew over vintage photographs. This seemed like a new type of work for me to present in a show like this, they work well in a book format, and they are much quicker for me to produce than full page drawings. 50 full 11″ x 14″ drawings, and 50 collaboration drawing / photos with Rick. The full drawings usually took at least a day each, but the photo collaborations I could do a few in a day depending on how quickly I could come up with ideas.  Some ideas where obvious and immediate, some took more time, sketches, and research about past mayors, or architectural details.

CL: You’ve described SF as having a certain sort of “magic” to it. Speaking specifically to other visual artists, where can they expect to find this magic if visiting SF?

JF: San Francisco has different magic for different people. What I find magical, you might not. For me, I prefer the areas in the City that have changed the least in the 21 years I’ve lived here. I spend most of my time in North Beach, Chinatown, and Fisherman’s Wharf, as they are pretty timeless. I also really love the Lower Haight, the Outer Sunset, The Richmond district, and the Presido. Go to Mamas or Original Joes and have breakfast. Go to Golden Boy or Tony’s Pizza (the 11 time world champion!) and have a slice. Go to Caffe Trieste (the oldest espresso bar on the west coast!) and have a coffee. Go to Naked Lunch for a sandwich. Go into City Lights and buy a book. Go to Al’s Attire and design yourself something rad to wear. Stop by Specs for a Beer. Go to the Musee d’ Mechanique and play some weird old games. Go to the tall sailing ships museum, and explore an old pirate ship. Go to the Art Institute and marvel at the massive Diego Rivera mural. Climb a huge hill and smoke a huge doobie at the top. Ride a Cable car at least once. Get on a boat and cruise around the bay. Go to City Hall, wish her a Happy Birthday, and check out my show. Don’t ask your phone to tell you where the magic is. Turn it off and go explore.

CL: It has been a year since you underwent surgery for a work-ethic-induced aneurysm, which you appropriately named “Biggie-Smalls”. Aside from volume, how has your new take on life, specifically the necessity of taking it slower, affected your work?

JF: After two brain surgeries, a slightly reduced workload, no travel, and 8 months of Anger Management classes, the aneurism is healed and no longer a threat to my health. Unfortunately, I have since been diagnosed with Epilepsy. It was these epileptic symptoms that initially brought me to the hospital, and helped doctors discover the Aneurysm. As all this was going on I produced 30 pieces for a solo show in Denver, 20 pieces for a group show in Milan, and 100 drawings for City Hall. Since finishing City Hall I have recently begun a massive project for the 49ers and the Super Bowl that will take me the rest of this year to finish. To be honest, it has been pretty horrible. I don’t like taking it slow, or taking time off. It cost $250k for the two surgeries to take care of Biggy the aneurism. He was too large to remove, so he currently lives dormant inside my skull. RIP Biggy.

CL: I’ve heard you mention how influential cartoons were to you in your early life, what were some of your favorites to watch as a kid? Do you still watch cartoons and do you have any favorites today?

JF: I was deeply into Hannah Barbara cartoons from the 60’s and 70’s. Captain Caveman, Hong Kong Fuey, Grape Ape, and the Hair Bear Bunch were some of my favorites. The USA cartoon express was a childhood addiction for me. I loved old Disney too. As cartoons went digital, I found skateboarding, and stopped watching as much TV. These days I don’t watch too many Cartoons honestly. I don’t really like computer driven animation. It just looks kinda cheap to me. However, I do love Bojack Horseman, Bobs Burgers, Family Guy, and The Simpsons.

CL: If you were to teach a class on anything to a group of eager artists, what would it be? What would the focus be on?

JF: I would teach screen printing. With a focus on paper print editions, tee shirts, and tote bags. A practical application for artwork.

CL: March 27th of next year will mark the 25th anniversary of the Silly Pink Bunnies, do you or any of the other SPBs have an art show or event planned for this landmark?

JF: There will be a HUGE gang wide celebration and convention. No art show hopefully, as it’s not really about art. The Silly Pink Bunny gang is about being bros for life, partying with your old friends and their families, and also skateboarding. Maintaining friendships for life. After 25 years there are around 250 active members. Long Live the SPBEEZ.

CL: Finally, knowing all the things you do at your current age, what advice would you give young artists trying to make a name for themselves today?

JF: Give up now, and go do something else. Unless you aren’t good at anything else, then make as much art as you possibly can. It’s the best way to improve at anything you do. Be original. Find inspiration in things other than art. Don’t beg for opportunities, work hard and earn them. Have fun with it, because It doesn’t pay well enough to be miserable. Best of luck to you!

You only need to hear a few words to see why the San Francisco City Hall would choose Jeremy Fish to help celebrate their centennial birthday. His appreciation of the city is 20 years in the making but powerful enough to represent 100. I have been a Fish fan for a few years now and am continually inspired by his consistent body of work. From bunnies to bears to burger clothes, you’ll find that getting in the mind of Jeremy Fish will always leave you wanting more.

Follow Jeremy wherever he ends up next at SillyPinkBunnies.com 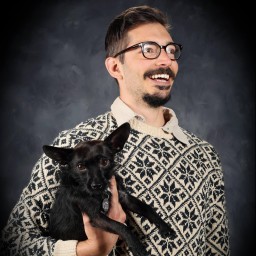 Mike Oncley is CreativeLive's Seattle Studio Manager and spends his free time creating his own art and drinking gallons of coffee daily.