Los Angeles-based designer and maker Robert Mahar specializes in unique crafts that are easy to do yourself. Recently he demonstrated how to make ombre yarn pom poms, which can then be used to finish off Pajaki chandeliers.

You can make a quick and simple ombre pom pom using any colors of yarn you prefer, then incorporate your finished product into your chandeliers or other projects.

Yarn (monochromatic or up to three colors for an ombre look)
Regular size Pom Pom Maker, available at most craft stores
Button-and-craft thread
Pair of scissors

Step one. Extend one of the pairs of arms on your Pom Pom Maker. Set each ball of yarn in a small bowl to hold it in place while you work.

Step two. Press the darkest color of yarn to the flat side of your Pom Pom Maker with your thumb. Wrap the yarn around the two arched components of the arm. Completely cover the arches with the yarn.

Step three. Once your arch is covered, cut the yarn and begin covering the same arm with the second-lightest color of yarn in the same manner.

Step four. Once you’ve covered the arm with the second color, snip and start wrapping the lightest color of yarn in the same manner. Once you have so much yarn that the angle of the arch has completely disappeared, close the arm and snip any loose threads.

Step five. Repeat the same process on the second arm of the Pom Pom Maker. Once the second arm is filled with all three colors of yarn, close the arm and snip all loose threads.

Step six. Note the cutting channel in the center of the ridge between the two arms. Use a pair of scissors to cut all yarn in that channel. Thicker yarn may require more effort to cut. As you cut, you’ll begin to see the pom pom forming.

Step seven. Flip the Pom Pom maker over and cut the thread in the cutting channel on the other side.

Step eight. Cut a piece of button-and-craft thread and slip it into the channel on the outside of the now-closed arms. Wrap the thread around and tie a knot. Pull it taut, then wrap it around and tie a double knot on the opposite side.

Step nine. Open the arms on both sides and separate the halves to completely remove the pom pom. Holding the button-and craft thread, shake the pom pom to extend all loose yarn.

Step ten. Flatten the pom pom into a disc shape. Use the scissors to trim all the way around in a circular fashion to remove all longer threads. This will round the pom pom out. Flatten other sides and trim to make sure you get as many longer threads as possible. You can create multiple ombre pom poms and use them in your Pajaki chandelier or to top off gift boxes.

To learn how to make these chandeliers for your home, check out Robert Mahar’s CreativeLive class, Stylish Pajaki Chandeliers. 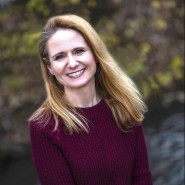 Create Blooms That Last: How to Make Tissue Paper Flowers

A Look Around the Inspiring Studio of Robert Mahar

Want to Crochet a Granny Square? Vickie Howell Can Show You How it is Done

How to Read a Yarn Label: Super Useful Tips from Vickie Howell