This month, we are shining a spotlight on Michael Nolasco, a CreativeLive student, music producer, and songwriter who challenged himself to get out of his comfort zone Michael Nolasco can’t think of a time when music wasn’t part of his life. It was mostly a hobby, until he started taking recording classes and a light bulb went off. He discovered the discipline he needed – the first step towards realizing his dream.

As a tall, lanky and sometimes moody teen, Michael saw music as a big part of his life. He’d listen and  absorb any form, type or style of music he could get a hold of.  Once When he saw a movie in the theatre,he became overwhelmed by the score realizing how the music notes were subconsciously affecting the moviegoers around him.

As Michael discovered the complex allure of heavy metal and instantly identified with its intense lyrical style, devoured each album he could get a hold of, which led to the ban on heavy metal in his parent’s house. To remedy that, Michael went out and taught himself how to play guitar, despite the fact that his parents stressed that music was just a hobby, not a career.  By the time he was a high school senior, Michael was a fixture in the local music scene, having served as the frontman in several bands by the time he graduated.

The Year Of The F*ck-its At 21, Michael graduated college with a BS in Psychology and set out to build a life according to what everyone else said was ideal.  Settling down in a mediocre relationship, Michael would hang with old friends and blow off steam rather than working on his music.  Deep in the ‘party-scene’ post-college, Michael had suppressed his musical creativity and developed a negative mentality held by his circle of friends. Michael refers to this time as “The Year of the F*ck-Its.”

Andy, one of his close friends and roommate at the time saw how unhappy Michael had become.

“Back then,” Michael says, “I wouldn’t have been so sure of myself if Andy didn’t believe in me and just really give me the courage to go after what I wanted in life.”

While checking out the metal blog Metalsucks.net, Michael discovered CreativeLive and Eyal Levi’s Mastering Metal Mixing class.  Early into the broadcast, Michael recalls how Eyal’s insights made him realize something important.

“I just wasn’t even close to his level, and it kinda took the pressure off my back because I accepted the fact that I couldn’t produce that level of perfection without the same amount of experience and hard work.”

He decided to focus on what was within his control and what he could do to move forward.

“My understanding of music production was really just scratching the surface,” Michael remembers.

“Something happened in that class where I just started seeing my heroes as normal people, these guys were no different than me, we have the same passion but they’ve put in A LOT more work.” Witnessing Eyal’s discipline gave him direction and insight into the industry that he didn’t know existed.

“I realized that I hadn’t taken the time to really define where I wanted to go with my work, so once I had a clue, I went back to the class to really understand the steps to get there.”

“Something happened in that class where I just started seeing my heroes as normal people, these guys were no different than me, we have the same passion but they’ve put in A LOT more work.” Witnessing Eyal’s discipline gave him direction and insight into the industry that he didn’t know existed.

“I realized that I hadn’t taken the time to really define where I wanted to go with my work, so once I had a clue, I went back to the class to really understand the steps to get there.”

Michael dabbled in all facets of music production for a while before realizing his passion was composing and scoring emotionally-charged arrangements.

“It’s not necessarily about the lyrics,” he explains. “It’s about the arrangement of the music – that’s what I love, I love just making things that make people feel something.”

With focus, Michael spends several hours a day sharpening his guitar skills, with practice spilling over into the weekends. “I was just playing as much as I could. After that, I’d sit down and literally write down all the lyrics and ideas in my head until I couldn’t squeeze another word out.”

It was an intense schedule, he says, but that time was crucial.

“It allowed me to tap into that same creativity whenever I want, now I can hear where I want a song to go, or look at my guitar and visualize what I want to get out of it.”

Michael’s biggest leap came when he and Andy made the decision to pack up and move to the city at the heart of the music industry, Los Angeles. Michael has a fresh start, a new community of collaborators and plenty of inspiration right in his backyard.

For Michael Nolasco, success is “writing music, collaborating with artists, producing something – that’s the dream, that’s the goal.” He’s doing that and more with his latest EP release, Deadwood.

Connect with Michael and his work via email and make sure to check out ‘Deadwood” his soon-to-be-released EP.  Info will be available via Facebook and will be released through Bandcamp in June, 2017 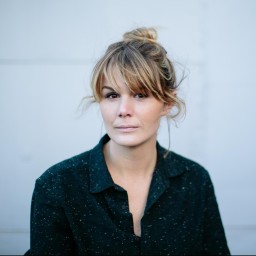 Community Marketer at CreativeLive and lover of design, coffee breaks and petting of ALL THE DOGS. Follow her adventures on Instagram @LifeofMelJack.