You Are Not Too Busy to Be Healthy Many, many pages of the internet and print journals have been ceded to the discussion about the weighty issue of American obesity. Most of them find fault in food production, sedentary office work, dependence on cars, and just about anything else that’s changed in the last 100 years. And while it’s true that there’s a lot of troubling data about the way we view food and health in the U.S., on a personal level, getting healthy usually comes down to one thing: Habits.

“A lot of people worry that they’re doomed to follow the path of unhealthy family members. But while genetics certainly plays a role in health, lifestyle changes have a much, much larger impact,” says Foodist author and Ph.D. Darya Rose. “We didn’t all suddenly get bad genes in the past 50 years, it’s our habits that changed. That means we actually have more control over our destiny than we think.”

Darya says that, though many of us feel like we’re beyond maxed out by the time we finally hit the sack at the end of the day, making time for daily movement isn’t nearly as difficult as it may seem — and it has a much bigger impact on our health than we realize.

“There is only one real reason people aren’t healthier, and it’s simply that they aren’t in the habit of it. People who do eat healthy and exercise don’t magically have more time, they’ve just figured out a way to make health a normal part of their lives.” “I don’t know anyone who isn’t insanely busy. Some of us prioritize health, others don’t. It has nothing to do with time, but how you approach it,” Darya says. And it’s a lot easier to prioritize health when it’s just part of your daily life — making it a habit, rather than a have-to-do-it.

Part of the problem could be the way that exercise, weight loss, and health generally are sold and packaged in the U.S. A quick look at Pinterest’s myriad “fitspiration” boards churns up hundreds of photos of extremely muscular women with messages like “Suck it up now and you won’t have to suck it in later.” Exercise is viewed as a horrid, punishing evil, rather than a fun part of a normal life.

“One of the major reasons health isn’t a habit for most people is that the methods we are told that get us healthy are fundamentally incompatible with habit-building. That is, they rely on sacrifice and deprivation instead of happiness and reward, which are required for building habits,” Darya explains.

We’re also told that results should be quick, leading to discouragement if immediate change isn’t visible. And while 1950s-era pop psychology says that it only takes 21 days to build a habit, the reality is that it’s probably closer to 12 weeks. Which means committing to taking small steps, but taking them every day.

The key, says Darya, is little goals that are enjoyable — and feel attainable. Instead of starting with a huge end-point, like running a half marathon or losing a large amount of weight — make “getting moving” your goal, then go from there.

“I recommend starting with the smallest possible action you can do to begin a new habit. Say, simply putting your running shoes on after getting out of bed in the morning. Then you can graduate to walking around the block. Then jogging around it. The hard part is building the habit, the time will eventually be there.”

Want more from Darya Rose? She’ll be on CreativeLive talking about weight loss and a healthy lifestyle on Monday. Check out the full course description here. 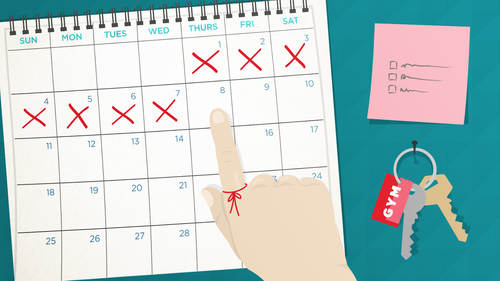 Mindfulness: Your Key To Staying Productive This Holiday Season

It probably feels like mindfulness is an overused buzzword at this point. But 2020 have proven to be a year…