When Apple first started selling music via iTunes and the whole industry started moving towards digital downloads, I held out a lot longer than I should have. Somewhat embarrassingly, I continued to hoard CDs only to import them into my digital library. Although these days I can’t stand those clutter-inducing silver discs (if I’m in the same room as one, I get anxious), digital downloads have always lacked something for me. It wasn’t necessarily audible, but rather more tactile and visual. I wanted something permanent.

My memories of listening to and experiencing music always involved flipping through the album booklet, reading lyrics, production notes and how the album art relates to the music. My formative years were immersed in the angst filled scenes of punk and hardcore; the art was often just as much of a statement as the lyrics and music. MP3s don’t have that. I also come from the last generation that had to discover music pre-internet (that’s not snobby reminiscing; in hindsight, it sucked sometimes). I spent countless, curious hours aimlessly wandering through record stores, scanning for anything that caught my eye. Album art played a huge role in this. I’ve bought many records for the sole reason that it had a cool cover, having no idea if it was good or not.

All that being said, I never really looked into who or what goes into creating the visual portion of what I still consider a holistic entity – the album. I designed the cover to my own band’s album once. Unsold (its defining characteristic) copies now sit in a box, hidden away as a testament to yet another scenario in which I had no idea what I was doing.

Fortunately these days I know someone who does. Rebecca King is the founder of Renegade Chihuahua, who specializes in art and design for the music industry. Full disclosure – she’s also my wife. Given that she’s designed literally hundreds of covers for Universal Music Group and many independent bands alike, I thought it interesting to pose a few questions to her about the process of designing art for music.

Why did you first get into designing album covers?

I knew early on I wanted to work in music. Both of my parents have always loved music and introduced me at an early age. There are certain songs that define certain eras of my life. I’ve been around bands and worked in venus for a good portion of my adult life. I see a lot of people get hung up on wanting to work in music but not know any other path besides being in a band or production. The “business” side of the industry turns some creatives off (although everyone should learn the business side, but that’s another conversation). That was me for a awhile. I actually went to college for design not initially intending to work in music because I didn’t realize it was a real option. I started creating album art and posters for some of my friends and it suddenly clicked that I can do this for a living. It’s extremely motivating and inspiring to use my own creativity to enhance or help the creative output of others.

Where do you usually pull the most inspiration from – lyrics, the music itself, themes or does the band usually present you with a fleshed out idea?

All of the above! When a band first comes to me, I ask them a ton of questions, many that may not make sense for designing an album cover, upon first glance. From experience though, if you ask the right questions they have a way of pulling out and defining conceptual ideas, imagery and overall aesthetic, and helps the musician to think about what they want out of their album art from a design perspective. I pose some branding and marketing questions to them that most bands aren’t going to think about or don’t think apply to them. As far as a cover goes, that might be the farthest thing from their mind and that’s ok. From this I get a good idea of what they want, what the record is about and what it expresses. This is not to say I pull all lot my inspiration solely from a few questions, but it gives me a foundation where I can then create something, making the right choices with their perspective in mind. Then I’ll dive into lyrical themes, messages and the music.

What’s your design process like? Do you start out on a sketchpad or do you immediately jump into Illustrator or Photoshop?

First thing’s first, I do one thing – I listen. I listen to all of the songs they send me for an overall tone: is it dark, dramatic, poppy, smooth, bright etc. Is there a genre that the design needs to fit into or better yet, break out of? I try not to get too analytical and just listen like anyone would. Then I research – the band, the style, their image and so on.

Oddly enough, against what all of my instructors in college told me, I do not usually do sketches first. Sketches bore me, lol. I find it much easier and faster to visualize what I want to do by jumping directly in Photoshop or Illustrator, sometimes with my graphic pen, and playing around with a few ideas.

At this point, the band doesn’t see what’s being done. I do this because I feel that seeing an unfinished design creates confusion without them being able to visualize what’s in my head. By now, they’re aware of my style and assumingly hired me for it. While you always want to work in step with the band, I think it’s important for designers to be confident enough in their work to take the creative reigns when necessary to make a project great. It’s why they hired you.

With digital music, covers are often reduced to thumbnails. Occasionally a band might release a digital booklet, but where to do see album design going in the future?

As far as digital and the future goes, I’d love to see things get more interactive. Take what Madefire is doing for comics with their motion books – they’re taking a previously static medium of comic books and making it dynamic with audio and movement. I think it would be amazing to download an album and get art that offers a whole separate and interactive experience beyond the music.

What are 3 of your favorite album covers? 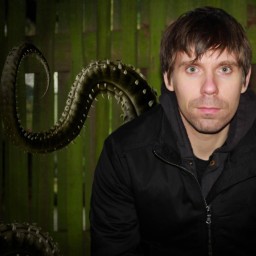 Ryan Roberts is a Content Producer at CreativeLive, is perpetually in awe at the democratization effects of education and would have gone into the sciences but the “can’t do math” thing got in the way. His dogs have nicer clothes than he does.

When To Keep Creative Secrets: Stop Talking Your Ideas To Death

When we feel the thrill of a great idea, our first instinct is to grab the nearest person and share…