Lesson 5 from: 30 Days of Photoshop 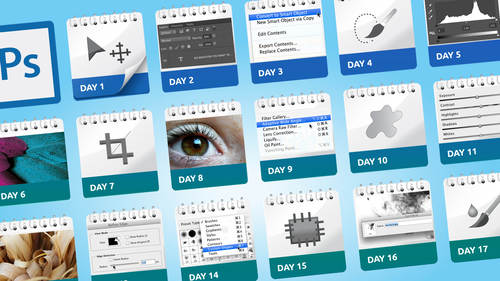 Lesson 5 from: 30 Days of Photoshop

the way this is gonna is always the same way. We're always going to adjustment layer and picking an adjustment just to make a point. If I had decided for the sake of argument that what I really wanted to adjust was this part of the photograph, If I make a selection first, then when I go to, for example, levels, now it's on Lee adjusting that area and you'll see what happens is the mask is the same kind of thing. It's black is hiding it. White is showing it. So one of the techniques that I talk about a lot asshole idea end up with. So here's an example of ending up with something. I want to make this wall slightly darker, but to make sure I see what I'm doing, I'm gonna make it much darker than I really need initially. And then on the layer mask, I'm going to take my paintbrush and start painting away. I'm painting with white, so I'm basically revealing the effects of the adjustment layer, and I'll just do a little bit to make a point so it looks like I'm painting with a dark color. Wha...