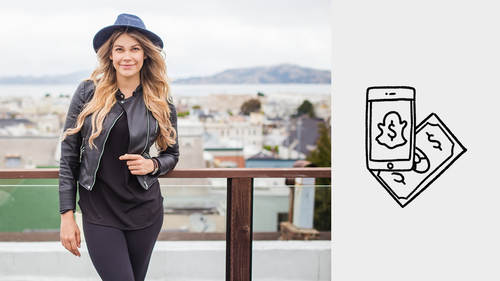 Why Advertise on Snapchat?

What are Snapchat Ads?

An Overview of Snapchat Ad Manager

So I did a few screenshots and had to be creative about covering the brands. (laughs) The logos. But you can see here, like this is Pandora, this is Trunk Club, and Credit Karma. So Credit Karma was actually an interactive ad, and they had sound. I think Pandora as well. And like Trunk Club, the items were moving and they were showing how they're getting in the box. So as you can see, most of them, like this is a little bit more creative and when I was served this ad, I was like what is this, what do I do? But they suggest that I install the app and listen to the music. This is kind of more, was a better ad for me because it's showing me that they can deliver clothes, the clothes look cute, they're neutral enough and creative enough, the items, to spark my interest, and then there is a very clear action that you sign up for the service. And then with Credit Karma, because they are about educating people about their credit score, and their whole business is that you know what your credi...

Snapchat is unique. Snapchat is complex. And until recently, the only way to run ads on Snapchat was to go through one of its ads partners. But that changed with the launch of the Snapchat Ads Manager.

Now you can create imaginative, engaging, full-screen video ads all on your own. Snapchat expert Inna Semenyuk, a seasoned marketer who’s worked with Facebook, Skype, eBay, Starbucks and others, will show you all the ways you can take advantage of the Snapchat Ads Manager to make a name for yourself on this popular platform.

<span style="color: rgb(34, 34, 34);">Inna is a marketing strategist, Snapchat creator and influencer who helps brands tell their story on Snapchat. She’s the founder of SnapchatDaily.com, the only professional blog about the best-kept Snapchat secrets for brands, and InnavationLabs, a marketing agency based in San Francisco.</span>
SEE INSTRUCTOR'S CLASSES