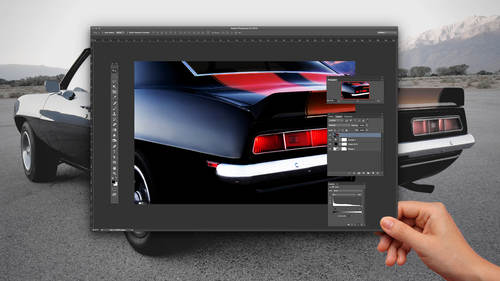 Compositing Clouds Behind a Bottle

the next thing I'd like to dio is go in and create that really awesome kind of paper texture effect coming from the bottom here. So I'm going to scroll into document and I got my awesome little paint peel right there, and that would look really good. I could put that down behind here at the bottom there, So it kind of looks all painting P. Lee and I could send that to the back. So I get that behind my object metal paint peel right there. But this looks really blatant and really crazy, and I would just love to be able to get just the texture of that. So with that, I could turn everything off again. So I get just that texture. Go to my channel here, and I'm gonna go to the one that's going to give me the best contrast and what I want to end up with as I just want to end up with the shadows that given very little cracks in my little curls. That's it all I want because really, none of this other stuff really matters. So the Blue Channel is going to give me the best. I'm gonna lose the back...