Lesson 3 from: Be More Charismatic With 7 Powerful Cues 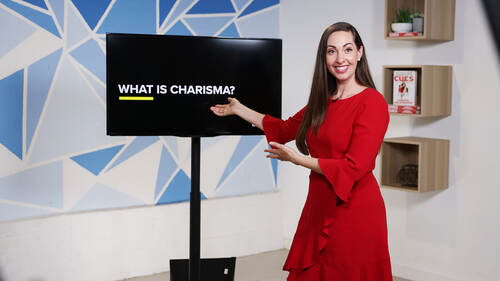 Lesson 3 from: Be More Charismatic With 7 Powerful Cues

3. How to Look Charismatic

Nonverbal cues are an essential and often overlooked part of human communication. These tiny, nonverbal audio and visual signals help other people determine your trustworthiness, intelligence, and talent. Learn which nonverbal cues will help you communicate authority and competence.
Show Transcript

The Science of Charisma

How to Speak With Charisma

How to Sound Charismatic

Charisma Cues in Your Personal and Professional Brand

4 Challenges to Master Your Cues

How to Look More Confident on Video

(upbeat music) We talked about how to sound charismatic with our words but how do we look charismatic with our body language? I'm a mega fan, super fan of honorable and body language. I've always known body language Is powerful, I just didn't know how. So just to briefly kick us off with some research. So, research finds about 60 to 90% of our communication is nonverbal. That is a huge range but what's important about that is it's the majority. I think that we tend to put all of our eggs in the verbal basket. We practice our pitch, we practice our presentation but actually our nonverbal communication is helping our ideas. Remember helping bring the gasoline to our ideas and helping them come along. I think that when we think about how we wanna communicate our ideas how we say our ideas are just important as what we say. The question is, what do we do with our body language to support our ideas? I wanna give a good example of this in action. Whenever I teach 60, 90% it doesn't actuall...

Great class! Vanessa is always engaging and fun with clear guidance and excellent stories. Everyone will gain something from this quick course on how to better present themselves in social and professional situations.

This class was great! Really applicable tips for how to balance out your own charisma scale. I learned that I naturally lean more towards competence (I can be cold, stoic, emotionless) and to come across as more charismatic, I can practice more warm body language, expressions, etc. Jam packed full of practical tips!

I've watched Vanessa Van Edwards' videos in the past and they've been so life-changing that I didn't hesitate to pay for a year's subscription just so I could watch this one. She did not disappoint - the content is engaging, easy to understand, and easy to implement!