Lesson 1 from: Become A Master Communicator 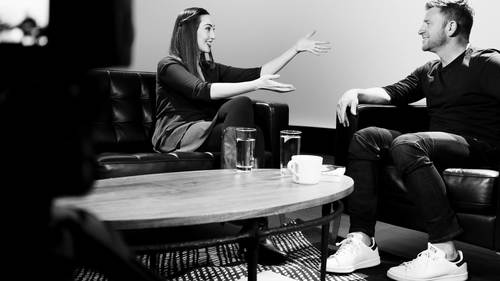 Lesson 1 from: Become A Master Communicator

Hey everybody, how's it going? I'm Chase Jarvis, welcome to another episode of the Chase Jarvis Live Show here on CreativeLive. This is where I sit down with the world's top creatives, entrepreneurs, and thought leaders with the goal of extracting valuable insights and helping you live your dreams and career and hobby and in life. My guest today is one of my favorite humans. It is Vanessa Van Edwards. Woo woo! Yay! (upbeat music) (applauding) I love you! Can we like hug without messing up my microphone? Yeah, we can do that. My mic okay, am I still okay? Yes, and make sure you do this. Yeah, I gotta do this, I have to keep it out. Matt was telling us, "Keep the hair out!" You made it, welcome! I made it. I love CreativeLive, I love being here. I love that you're here and I'm loving that we're gonna do what I think is maybe your first long form interview. This is the first time I've ever done it. I remember the first time I saw you, it was on the CreativeLive sta...

I had some free time today and saw this - WOW - it is a fantastic dialogue to listen in on - I learned a lot!!! Being an Ambivert I pick up a lot - and to thinks this was free - Watch and I know that you'll agree - I just loved it!!!!!

Utterly captivated by this enjoyable, fascinating and educational conversation. Thank you! Will be buying more! {Pls use this name. Jada Dow or none or I do not give permission to use this or prior comment)

It was definitely worth the time! Learned a couple of interesting things.