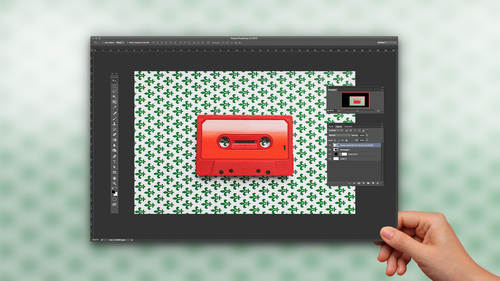 8. Layering Water onto a Floor

Masking Sky into a Window

Put Paint onto an Interior Wall

Masking an Object into a Room Interior

Now the floor looks really boring doesn't it? Well one of the cool things with my sky right here is that it's also got water in it as well. So wouldn't it be great to go ahead and put the water on the floor here so that we can see the water kinda over the floor boards. Well I would need to have a separate layer with this so I'm just gonna copy this layer right here in my layers panel, select my move tool, I'm gonna hold down my option key, I'm gonna option click and drag, and I'm gonna put this at the top of my document so I can see. And now I've got this right here at the top. There it is. I'm gonna set this back to normal so I don't mess myself up, set this opacity back at 100. And now I would like to go in and I would like to just mask out and see just the water. Do I have to go back through the entire process of selecting? Absolutely not because now I'd like the water to appear just on the floor and I know I have my selection of the entire wall and so here's my mask. I would love t...

He is such a good instructor. This is a completely basic class, with a little advanced stuff thrown in for good measure. Remember, back in the day, when you'd look at an image & you'd say, "That's totally Photoshopped," but it wasn't said in a nice way? Jason makes it Photoshopped, but in a positive, magical way. He's made me see that I can do this! I can't wait to try out his lessons. I'm so glad I purchased this class. 🤗

I Just loved the instructor, his voice and accent are so easy and the course was quiet funny. Easy language and material very dynamic, focused on the subject. Love his voice, sexy.

This class is amazing for beginners to compositing. It is literally step by step the fundamentals and basics you need to know and he is very clear and easy to follow. Great class!!!