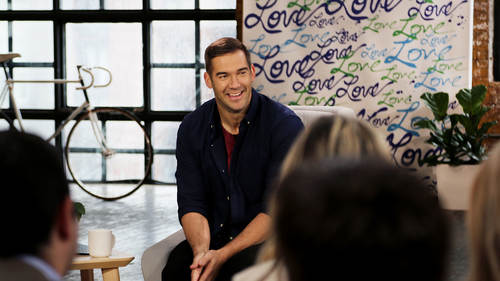 So now what we reserved is like 15 minutes of Q and A so that you can ask us questions about anything you saw, what was what felt weird, what felt natural. Anything that you want to know about either of us. Um, in this context, just feel free. So it's you can ask questions of either of us. Um, and if you don't ask questions, I'll just keep talking. So let's ask the question, please wait a second row. You, sir? Yep. Right there in the black, in the black. Me won't stop. Stand up. Tell us who you are, What you're grateful for. My name's Keith. And I am grateful for the concept of the the season. Like having something on my wall that I can refer to on a daily basis. Questions for you, Chase. Maybe you have some ideas to Luis. But you just showed us a riel. Great example of of an interview with a lot of flow. Um, I'm wondering if you could share with us some behind the scenes inner thoughts that you had along the way of moments where you found, like, anything that might be an illuminating ...