Skip to main content
photo & video
All Photography Classes > Macro > Beyond Macro Photography: Into The Microscopic World > Focus Stacking & Working With Your Image

Lesson 7 from: Beyond Macro Photography: Into the Microscopic World 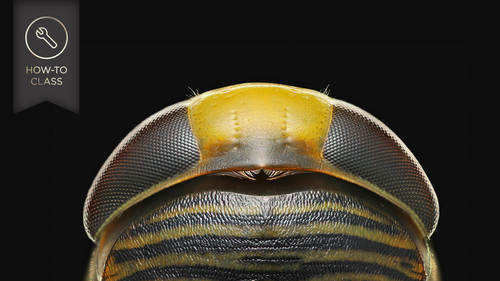 Macro > Beyond Macro Photography: Into The Microscopic World > Focus Stacking & Working With Your Image

Lesson 7 from: Beyond Macro Photography: Into the Microscopic World

7. Focus Stacking & Working with Your Image

Now, we're going to pop this thing open. And we're going to get it to focus, stacking. And basically, we focus stacking you. You take a picture you move it a small income and take another picture take another picture take another picture you start from near to far you could start from the back and go forward but basically you accumulate a stack of images then you throw him in the computer and you process him with the software now you camera should be set for auto white balance don't use I mean that what manual he's a preset white balance I can assure you should use manual exposure uh if he's flash he's a manual flash setting diffused lighting generally gives you the best results and ah be sure that utilize the techniques we talked about to minimize vibration we're going to crank up zarina stacker which is a focus stacking program that I use I use hillock on focus I used to read stacker those are both commercial programs and I'm terribly expensive but they do cause something obviously a...