Lesson 6 from: Blogging to Sell Your Products 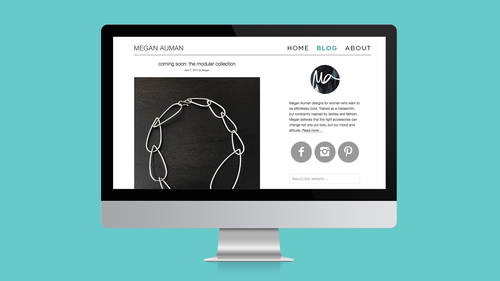 Lesson 6 from: Blogging to Sell Your Products

But I Don't Have Time to Blog

The Role of Blogging in Your Business

Choosing an Angle for Your Blog

Hot Seat: Choosing an Angle for Your Blog

What Should You Blog About: Content Ideas for Your Blog

Using Images in Your Blog Posts

Getting the Most Out of Your Blog

So now I want to talk about a really nice little trick to get you started blogging quickly. I promised you guys that we were going to really start quick, we're going to dive right into it right now. And I'm going to talk about how to turn a social media post into a blog post. So one of the other things that I hear from people is like, I don't know what to do for my first blog post. All right, anyone who doesn't have a blog or hasn't been blogging, do you feel like that? Like my blog has to be amazing because it's the first one. Um, no, because let me tell you something, no one's ever going to read your first blog post. (laughter) This is my first blog post, that literally is crap. It talks about how I was on Yahoo and I moved to Blogger and it's like the worst image ever, but it's from 2006. So, first of all, it's not optimized for SEO or Pinterest or anything in any way, so no traffic is coming to it. And no one is taking the time to crawl all the way back to 2006 on my blog. And bec...

I don't agree with Megan's assessment that writing a how-to process will only attract your peers and competitors, not your ideal customers. I know a lot of graphic designers who post design tutorials frequently and it only helps raising their profiles. Writing a how-to post doesn't have to be like shooting in your foot because: * You don't have to share everything. There's more to great designs than knowing how to draw a certain thing. Composition, color, typography etc all come into play. * Even if you're given a step by step tutorial, it's very likely that you will stumble into a lot of issues or it takes you too much effort and time to complete it and it's better to hire a professional designer. Web building tutorials are everywhere, but web developers and designers still have their places. There's a big difference between knowing and understanding. * Even if you're professional designer, sometimes it's better to buy from your colleague than to make it on your own because no designer is excellent at every aspect of design and for a designer, time is as much valuable as money. For example, web designer may need to purchase custom typefaces from a font designers, and reading a blog which indicates that the writer knew his stuff will inform the web designer to make a rightful decision. Other than that, the course is rich information packed with a lot of actionable strategies and real fact about the blogging landscape.

I went straight to Polyvore and created a blog post. Not as fast as Megan was talking but who cares the blog post created and this is the best result of the training. http://hometocome.com/2017/05/plany-na-leto-2017.html Feeling super motivated. Megan makes it sound easy to complete and absolutely not overwhelming. This training is like a fresh air. Thank you!

Lucky me! I stumbled upon this class and watched in live on air last night. I've now bought it! There is gold in this class and totally recommend it to anyone. Megan is so easy to listen to and I'm looking at her other classes too! Thanks Megan. You just made blogging a lot more fun! x