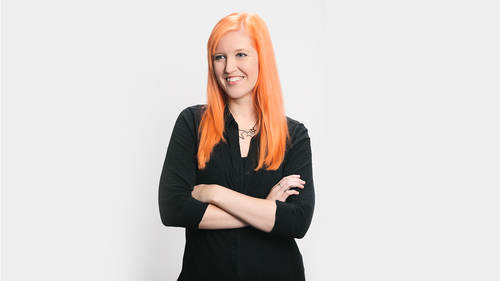 How to Prepare to be Edited: Overview

How to Prepare to be Edited: Proofread Your Own Work

How to Prepare to be Edited: Research the Market

How to Prepare to be Edited: Set Budget/Timeline

How to Pick the Right Editor for Your Project

What to Expect During Editing

So we're gonna talk about building a great writer-editor relationship. So I actually got my start with the written word as a writer. This is what I did. This is actually my own personal typewriter that I bought in a thrift shop in Phoenix, Arizona. I saw it, and I instantly fell in love with it. I was inspired. I knew I could write with this. And I did. I took a piece that I wrote on this very typewriter to my first creative writing class. And it was nerve-racking. I was so worried about how my writing would come across. And it was a little bit scary because I'd put so much energy and time, and so much of myself into this piece. And so I was inclined to just hold it close to my chest and protect it. It was mine. I wanted to keep it safe. And of course, the more I learned and the more I wrote, I realized that being open and being in a collaborative process is really helpful. It identifies your strengths as a writer. It identifies you weaknesses. And overall, it helps you grow. But I'm e...

xtremely grateful starting as a writer because now as an editor, anytime I work with a writer I know what that's like. I've been on that side. I've been on both sides of this relationship, and I've learned ways we can make it a productive, fulfilling one for the writers and for the editors. So this is my favorite quote about editing, and it's my personal view on editing. "The writer's relationship to a book "should be an invisible one." This is actually a quote by Robert Gottlieb. He's one of the few copy editors who might be famous enough that actually know his name. But if you don't, don't worry. He's and editor, you know (giggles). (audience laughs) And he has edited huge names. He's Joseph Heller, Nora Ephron, Toni Morrison, Michael Crichton, Ray Bradbury. I mean, Bob Dylan has been edited. So he knows what he's talking about, and he is an expert on building strong relationships. Matter of fact, one of Michael Crichton's books, he made him rewrite it three times, like full revisions. Start from the bottom and rebuild. And at the end, Crichton is quoted as saying he put out a better project than he ever thought was possible because Robert pushed him. But when you pick up that book, you don't see any of Robert in it. You only see the best Crichton had to offer. And that's what the editor does. The editor's there to support, and to push you to being the absolute best you can be. So it's easy to feel a little hesitant or a little apprehensive to share your prose, especially because the editor's got that harsh, red pen. It's difficult to think about your work coming back all marked up. And so, the best thing I always say and I always recommend is get to a place where you think about it as a team relationship and the editor as your partner. Because at the end of the day, everyone wants the same thing. Crafting a brilliant piece of writing is actually only half of the process. You write because you want it to be read. And in order to get it read and get it out there, the editor's there to help make those final changes and those steps. So while your writing is personal and it's something that's very important to you, it is also for the reader, and it's meant to be published. And in the same vein, the editor is working for the reader. So you're both working toward the same goal. You're on the same team. I always like to say that the editor refines what the writer builds. They're not there to make any big changes. They're just there to polish it up. An editor I know actually uses the fabulous little story of the writer has this child, and they've dressed it and trained it, and got everything ready. And their child's getting ready to run out the door with all this prep, and the editor just stops the kid and wipes the jam from corner of their mouth, and says, "Okay. Now you can go."