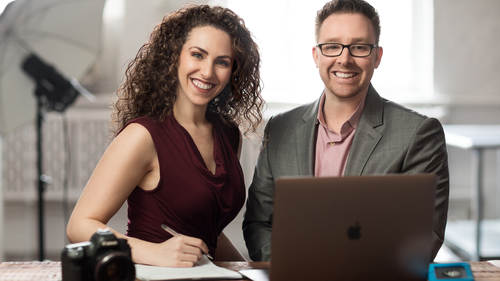 All right, so we're going to take a look at some case studies, and I'm excited about these because we're going to show you room for improvement, so you can be like, "Oh yeah, I do that and I need to fix that," or, "Oh yeah, that's what she's talking about. "I see it coming together." So, that's what we're hoping to get, those light bulbs. So, we are going to start with Geek Photog. Hi, okay. (audience laughing) So, we are going to talk about her site, and talk about what she's doing right or wrong. So, the idea here that we thought was super compelling is that she's a geek and likes to photograph geeky things for other people that are also geeky because she's part of the tribe. And when I say geeky, just really cool, funky things. I saw an engagement session or a bridal session with light sabers, and then I saw people as Stormtroopers. Fun, playful things, and I thought that was an amazing niche, an amazing focus. I think that was fantastic, but when I came to her site first of all it ...