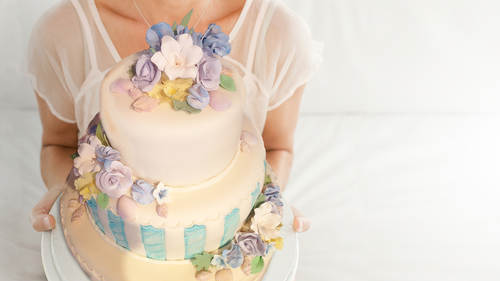 Part of what we want to do on our funding I want to do some painting because you had this incredible white beautiful campus so let's use that to our advantage and everybody was given a palette with some food color and we're just using it doesn't matter what food color you use you use whatever food color you want um you can even use your pedal dust if you want now I will tell you if you're using a peddled us to paint with when it dries it drives with kind of a velvety finish so that gives you a different look but that gives you a different look so that's kind of cool one of the things that I'm also going to do justice a heads up this is my water fondant that I've just needed and played with and I'm putting it into a bag I'm not putting it back into my funding that I didn't need I could mix them but I don't know it just seems like if I've contaminated it in any way, I'd just assume not contaminate the whole bunch and I'm going to use vodka again because it evaporates quickly doesn't leav...