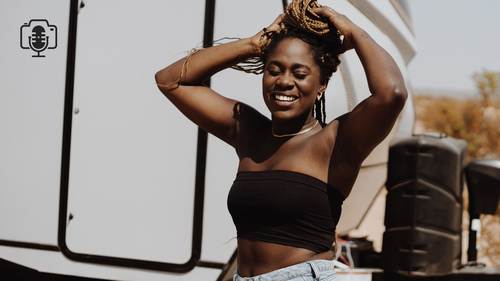 Yeah. Mhm. Mm. Mhm. Yeah. Yeah. Hello, everyone. And welcome to Creativelive. Welcome back to Creativelive. Welcome for wherever it is you're tuning in from all over the world. My name is Ken Klosterman, and I am your host here at Creativelive. I'm coming to you from my home. Like I said to yours, Wherever it is, you are to a beautiful studio in New York City with our guest, Rasheeda Zonagen. And before I bring Rashida on, I want to invite you all to give a shout outs again where it is that you are tuning in from. We love to hear where it is and let everybody else know we are truly a global community. So whether you are on creativelive dot com slash t v and you can click on the little chat icon, let me know where you are. How you doing today? And also, if you are on social media, you can drop that in there as well. We've got Kate and our team who is in there chatting with you all. So before I bring Rashida on, we are super excited here on Creative Live to be partnering with black women...

Rashida Zagon is a photographer, creative director &amp; storyteller based in New York City. Specializing in portrait photography she captures natural movement bringing to life the most authentic energy of each subject.
SEE INSTRUCTOR'S CLASSES