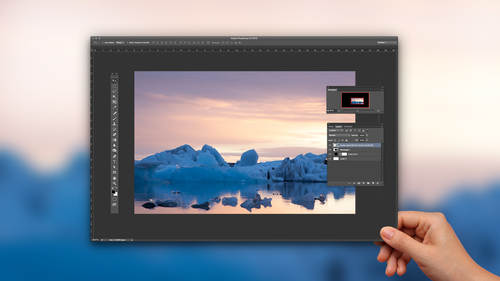 now. The problem, though, with this mask here is if I apply another filter to this layer, that mask will apply to it as well. And so right now I'd like to do something to smooth the rest of my skin. And if I do that, that mask is going to apply to it. In whatever smoothing technique I apply, there's only gonna apply to my eyes in my mustache. And I go to you know, that kind of stuff so often times I will need a duplicate a layer so all tight command j here and I'll throw away the smart filters. I'll just click right on the word smart filters and drag it to the trash. Now we don't have it applied to the duplicate. That was an accessory attached to the layer, and you just drag it to the trash in the bottom of your layers palette to get rid of it. Now let's try something that's going to smooth my skin. I'll come up to the filter menu. Let's choose Blur in most of these blurs would be so obvious that you blurred things, that it would just not be good. Uh, there is one, though. that can hel...