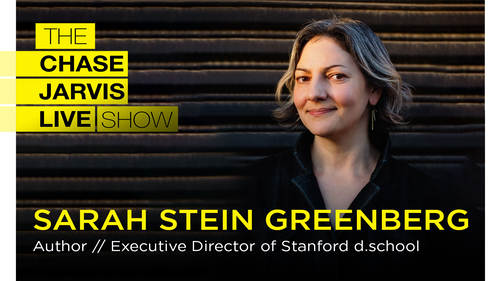 Hey buddy, what's up? Chase? Welcome to another episode of the show. You know the Shore? I sit down with amazing humans unpacked their brain with the goal of helping you live your dreams and career hobby in life. The guest today is Sarah Stein Greenberg, she's the executive director of the D school at Stanford. With your wonder what the D school is that is the Hasso Plattner Institute of Design, very famous design school where they bring in all kinds of people from numerous disciplines and they work to underpin what design does across industries on a global scale. She's got a new book that we talked about called Creative Acts for curious people how to think, create and lead in unconventional ways. It's out now. I highly recommend this conversation. If it's if you're interested in solving things like how do I see things in a new way, How do I work well with others? What are some ways that I can make sense of that? I've got these great insights but how do I articulate them in my project,...

It’s an obvious truism but something often neglected, but design is everything. It’s literally in every man-made thing we make, use, or celebrate. According to today’s guest, the act of design and creativity can benefit everyone, whether they see themselves as creative or not. Design is a process of free ideation, the overcoming of challenges and the presentation of clever solutions.

Sarah Stein Greenberg is Executive Director of the d.school at Stanford (aka the Hasso Plattner Institute of Design), which brings in designers and creatives to explore what design brings to global industries. She’s also the author of the intriguing new book Creative Acts for Curious People: How to Think, Create and Lead in Unconventional Ways.

Sarah cites her early discovery of the freedom of Lego construction, together with her father’s carpentry practise, as twin inspirations for her own creativity. We talked about design as a language and creativity extending beyond the narrow realms of “art”.

She gives the example of students tasked with improving patient throughput at a busy hospital. Their novel improvement, based upon observation, was to design a program of health education for the families nervously waiting for their relatives’ discharge. This oblique intervention significantly reduced the rate of patient readmission. Design can be an adventure and a revelation.

Sarah Stein Greenberg is the Executive Director of the Stanford d.school. She leads a community of designers, faculty, and other innovative thinkers who help people unlock their creative abilities and apply them to the world. Sarah speaks regularly at universities and global conferences on design, business, and education.
SEE INSTRUCTOR'S CLASSES