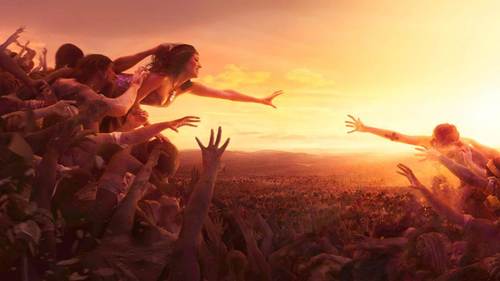 We just show you guys a little bit about compositing, and I'm gonna show you guys some of the things that maybe you can do with compositing and compositing is basically there we go, let's, just make this a little bit bigger. Compositing is basically combining multiple files together so it can be done, you know, very simply in just like what we did in alaska's, where we took a little bit of hair and edit it to the person. Or it can be done quite a bit more complexly. And here we have an example of something that's quite a bit more complex. This is an image that I shot over a few days. We shot thirty different people in a set that we built in our studio, buried everyone this deep in sand and built this entire image, which is probably over one hundred fifty mega pixels. It's absolutely huge. But the entire background, every single piece of this image is there's no actual landscape in it all the way from as far back as you can see. It's actually all made up of people, you know. So we have ...

This is an amazing class. Aaron is generous in given worthfull advices. I have learned so many things in this short class.

Even though the class is based around a fairly old version of Photoshop, there are still a bunch of useful tips & techniques that work with the latest version of Ps CC. Aaron is very clear at explaining & demonstrating how to's. Kind of a Goldilocks... not too fast, not too slow - just right! And, I got a kick out of how different his hair looked when this was recorded vs how it looks now!).