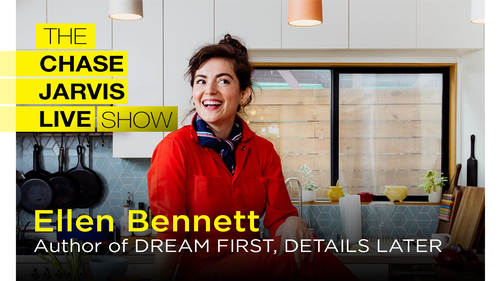 Hey everybody, what's up? It's Chase! Welcome to another episode of the Chase Jarvis live show here in Creative Live, you know the show where I sit down with amazing humans and do everything I can to extract from their brain and share it with you and my guest today is Ellen Bennett. Now if you're in the food world, you know who Ellen is, if you are not be prepared because Ellen started working at nine years old around her house, moved to Mexico by herself at the age of 18, back to the United States and walked into the back door of a Michelin two star restaurant, got herself a job as a line cook and the rest, as they say, is history. She today runs Hedley and Bennett, which is an apparel company that specializes in premium chef aprons. Now that sounds like a small business, huge multimillion dollar business supplying chef wear for the best in the business. Nobu David chang april bloomfield, the best of the best and if you've ever wanted to start a business in an area that you love this ...

Ellen Bennett is the founder and CEO of Hedley &amp; Bennett, an apparel company that specializes in premium chef aprons. Since starting the business in her L.A. home, Ellen has grown H&amp;B into a multi-million dollar business. H&amp;B has collaborated with Vans, (Red), and Don Julio, among others and creates uniforms for 4,000 restaurants and coffee shops all over the U.S.
SEE INSTRUCTOR'S CLASSES