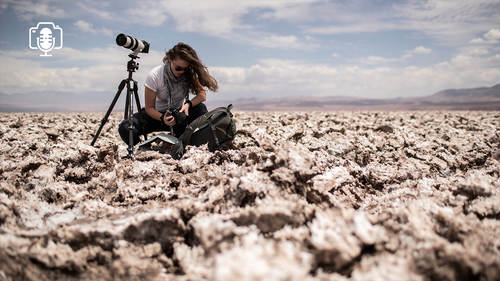 Yeah. Hello, everyone. And welcome to Creative Live. My name is Ken Klosterman, and I am your host today for the podcast were photographers that we have here on Creativelive where we come to you live. Of course. Right now, from my living room to yours to the living rooms, kitchens and studios, home studios of photographers, film makers, creative industry game changers from all over the world To let you all know that you are not alone in your creative struggles and winds as well. We're all living this creative life, and the more that we can learn from other people's stories, the more it gives us the courage and ability to keep moving forward with our own. And so today I am super excited to have our guest, Taylor Res. And Taylor is a photographer, a filmmaker, documentarian, Um, she is a photojournalist as well, and an avid explorer, Taylor does a lot of work around environmental and humanitarian issues that she is passionate about and making changes through filmmaking through the world.

In this episode, Taylor shares insights on the making-of a number of her recent films including From Kurils With Love. Her short documentary film Ashes to Ashes became Oscar qualified after winning 18 film festival awards on its circuit. She is currently working on a feature documentary about the impacts of green technology and lithium mining in the Atacama desert of northern Chile. We discuss the importance of co-creating narratives with the people and communities who are the subjects or may be impacted by her films. Find out what the role of director actually entails and hear stories from expeditions all over the world.

Taylor Rees is a filmmaker, photojournalist, Sony Artisan and avid explorer. She’s driven by an insatiable curiosity to explore and tell the stories beneath the surface. She infuses her passion for adventure into her work around environmental and humanitarian issues, bringing new perspectives and deeper public understanding to the complexities of climate change, conservation, indigenous rights, environmental justice and extractive industries. She's shot and directed pieces for clients including National Geographic, The North Face and the United Nations.

Ashes to Ashes
From Kurils With Love

Taylor Rees is a filmmaker, photojournalist, Sony Artisan and avid explorer. She&#8217;s driven by an insatiable curiosity to explore and tell the stories beneath the surface. She infuses her passion for adventure into her work around environmental and humanitarian issues, bringing new perspectives and deeper public understanding to the complexities of climate change, conservation, indigenous rights, environmental justice and extractive industries.&#160;
SEE INSTRUCTOR'S CLASSES