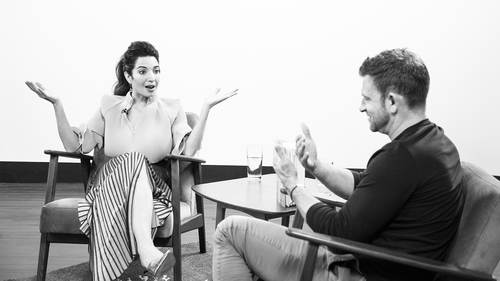 everybody wants of its chase. Welcome to another episode of the Chase Jarvis Live show here on Creative Live. You know this show. This is where I sit down with the world's most amazing people and I do everything and I mean everything that I can unlock their brains with the goal of helping you live your dreams in career in hobby and in life. My guest today is an entrepreneur. Oprah called her the thought leader for the next generation. She is also the author of this amazing book that you must stop everything now and go check out is called Everything is figure out Herbal. Her name is Marie for Leo, and she's our guest on the show today. Marie, Welcome. You know, this is my first time in Seattle. What? Yes, so thank you. Welcome to our fine city. It's awesome. It welcomes you. It's very happy that you're here. It's sorry. It's a little bit under the weather today. I love inch. It's cozy. Um, Holy smokes. I was just right before you walked in looking at a video online of your book launch. ...

You know her, the award-winning host, author and speaker, Marie Forleo returns to the podcast to talk about her new book , Everything Is Figureoutable. In the New York Times Best-Selling book, Marie gives readers tactics to look at setbacks positively and overcome obstacles creatively, so you can start reaching your dreams.

In this episode, we sit down to talk about how her life experiences influenced the book. She shares stories of fear, failure and always having fun have impacted her life. And we discuss a quote of hers (that I repeat all the time) that can help you get into the creative zone.

A born-and-raised Jersey girl with nothing more than passion, a laptop and a dream, Marie Forleo has created a socially conscious digital empire that inspires millions across the globe. Named by Oprah as a thought leader for the next generation, she's the star of the award-winning show MarieTV, with over 50 million views, and host of The Marie Forleo Podcast, with more than ten million downloads. Marie has taught entrepreneurs, artists, and multipassionate go-getters from all walks of life how to dream big and back it up with daily action to create results. She runs the acclaimed business training program, B-School.