Eyes Over the World

Eyes Over the World with Dirk Dallas 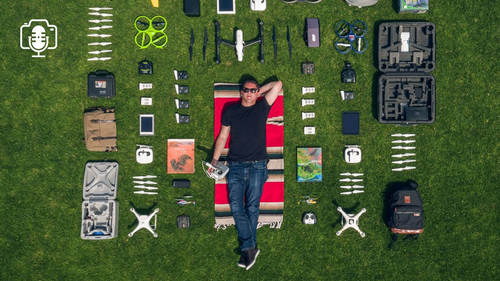 Eyes Over the World

1. Eyes Over the World with Dirk Dallas Show Transcript

Eyes Over the World with Dirk Dallas

Mhm. Yeah. Hello, everyone. And welcome to creative live. I am kind of Klosterman, your host Haircut of live and the host of our podcast. We are photographers, and we have another fabulous episode here today. Um, coming to you from my home to my guest, Dark Dallas is home and to your home. So thank you, everyone for being here. Um, super excited to have one of our educators here on the podcast. Dirk Dallas. He's kind of known as the drone guy. Hey, is, uh, an FAA license drone pilot? He's a speaker. He's a professor. Um, he's really been around from the early days of the drone kind of world in photography and cinematography Started the movement. The hashtag from where I drone, uh, curated account. And now he has a brand new beautiful book called Eyes Over the World. The most spectacular drone photography. And he's got the adirama TV Siri's from where he drone as well. So dark Dallas. So fabulous to see you again. And thank you for being here with us on the show. Awesome. Thank you so m...

In this episode, learn about the origins of the #FromWhereIDrone community of 230,000 creators globally. Dirk explores his early days discovering the new world of drone photography and his fascination with flight from age four. Find out the joys and challenges of creating his new book Eyes over the World featuring 125 contributors from seven continents. Dirk gets real about recognizing he needed to check his ego and create boundaries to prioritize his family. Hear how aerial photography offers us new perspectives about our planet and ways to explore our curiosity as humans.

Dirk Dallas is an FAA-licensed drone pilot and photographer, designer, professor and speaker, and the author of the new book Eyes over the World: The Most Spectacular Drone Photography. Dirk is known as an early leader in the drone photography movement having founded @fromwhereidrone and FromWhereIDrone.com, a leading drone photography and cinematography community and website. He is the host of Adorama TV’s web series “From Where I Drone", and a CreativeLive instructor.

<b><p dir="ltr">Dirk Dallas is an FAA licensed drone pilot, commercial photographer, filmmaker, speaker, professor of design and visual experience and the host of AdoramaTV&#8217;s web series &#8220;From Where I Drone with Dirk Dallas.&#8221;</p></b>
SEE INSTRUCTOR'S CLASSES