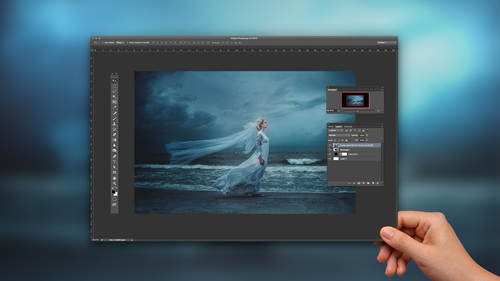 So here we have three pictures in Adobe Camera Raw and a lot of people like to use Lightroom for Raw conversion but just my personal preference is ah is ah is Photoshop. So, we have three different pictures. All have very different looks and today I'm just going to show you some of the tools that I use to convert my pictures. Okay, so, over here on the right, we can see that we have our basic set of controls. You've got the temperature which if you shoot in Raw this is beautiful because if you want the image to have a cool tone, you can. If you want to add some warmth to the picture, you can. You can tint it, whenever you want. We have the exposure, contrast, shadows, whites, blacks and clarity. And then we have some sharpening tools. You can sharpen you can increase the radius so it's a little bit more crisp. So we'll play with that a little bit. We'll also play with the HSL scale but we'll get to that in a second. Split toning is a fun one, and... we have lens correction you know the...

Photoshop is a valuable resource for fine art creators of all stripes and skill levels. Follow TJ as he teaches you how to unlock lesser-known Photoshop tricks, tips and advanced techniques for adding artistic effects to images. You'll also learn how to take advantage of such features as advanced raw conversion, color toning, and adjustment layers. Invigorate your art and energize your workflow with this insider post-production tricks.

Well, this dude is awesome, he knows too much! What I saw when I first watched this instruction is his manipulation of light, and he knows light and color. If you don't know Photoshop, and Adobe Camera Raw --- you will need to learn many of those functions first to follow along. TJ isn't showing you why he does certain things step by step, he is creating, and you're watching him do it. He does tell you the reason for Camera Raw is to get as much detail out of the Raw file before taking it into Photoshop, but then he does it all by eye, no histogram help, no clipping help, no sharpening reasoning ---it's all on the fly. He's a brilliant young man -- he isn't an instructor yet, because he doesn't know that he knows more than all of us already ---because it comes so easy for him. If you want to see how to create light in your landscapes and colors TJ style --- watch and learn ---more than once---if you don't know the basics of all the layers and functions ---you'll be watching this class many times. For TJ doing this live -- with no experience teaching -- that's tough --but he showed you -- and he wasn't showing off, he kept it basic mostly ---till the end. I would recommend this class, yes, with a caveat, don't think you're going to edit like TJ right away ---he's moving fast, that's why the class is fairly short. My .02 cents --