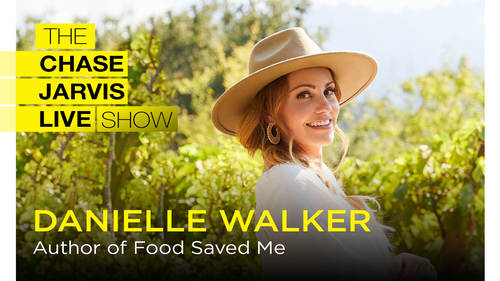 Hey buddy, what's up? It's Chase Welcome to another episode of the Chase Jarvis live show here on Creative Live. You know, this show, I sit down with amazing humans unpacked their brain and share it with you in this amazing format where we get to hear long form, conversational uh genius at work with the world's top creators, entrepreneurs and thought leaders. And today's guest is Danielle walker, someone I've been trying to get on the show for a while, she's very busy because all she does is right new york times, bestselling books and spread amazing knowledge about food. Now food obviously is required for human life and I like to enjoy food at the same time, I want to be more mindful of what I put in my body. So a number of years ago I started paying close attention to that and one of the people's work that I stumbled on Lo and behold was Danielle's, she had written a number of cookbooks, one that I loved called Eat What you love. And this talked about both the positive benefits of eat...

You’ve heard it bandied about in various contexts, but what do you really think when someone talks about healthy eating for maximized performance? Do you think one needs to give up on tasty to stay healthy?

Danielle Walker, the popular food blogger behind Against All Grain, tells us today that healthy food doesn’t have to be rude to the taste buds — so long as you’re willing to do a bit of research.

Danielle has been on a mission to share healthy food with the world for over a decade. She started with her first cookbook, Against All Grain, a New York Times Bestseller, followed by two other New York Times Bestsellers, Against All Grain Celebrations and Eat What You Love. To top it all, Danielle has a new release – Food Saved Me, a memoir detailing her journey of finding health and hope while living with an autoimmune disease.

In today’s episode, Danielle shares how she turned her kitchen into her laboratory, experimenting and discovering gut-friendly delectable recipes. We also discuss inflammatory diseases, their impact on the ones affected and those living around them, and why eating healthy is the first step to dealing with any autoimmune disorder.

Some points to take away from our conversation:

Danielle is throwing a virtual book release party on the 13th of this month. Check out her website, daniellewalker.com for more details.