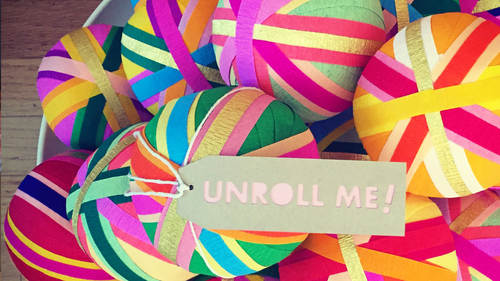 So now that you've completed the contents of your surprise ball, what we want to do is spend some time decorating the exterior, and I want to show you first how to give it a very simple but fun exterior decoration. And then in the next segment, we'll delve a little bit more into small ornamental exteriors, so we're going to be dealing with a little bit of a nicer grade of crepe paper for this next step. The crepe paper streamers from the party store were great for wrapping oliver contents together, but for the exterior, we want a little bit of a higher quality and what I tend to gravitate towards are these really great folds of crepe paper? I have some online resource is available in the materials list for this course that shows you where you can purchase these. This is a german do blake crepe paper, which basically is two different crate papers that have been fused together and the way that they come together is pretty fantastic cause it's slightly different shade on either side. Now,...

Illustrating Characters and the Stories They Tell