Lesson 7 from: Getting Started with Colored and Graphite Pencils 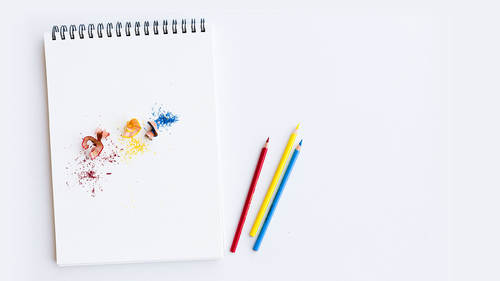 Illustration > Getting Started With Colored And Graphite Pencils > Demo: Surfaces And Pencil Types

Lesson 7 from: Getting Started with Colored and Graphite Pencils

I did do some testing on the traditional watercolor paper. And it was really kind of exciting. Okay Kenna, so you need to choose a color that I'm gonna play with. Alright, how about we go back to red? Okay, so we will test with a water based red and we'll test with, we'll go over here to a wax based red. (pencil scratching) Now you can clearly see, and I used here water plus the texture because it's water color paper. So it really did an interesting thing. It almost looks like stone. And here I just did what I'm doing now which is just straight on dried pencil on the surface. What it does is it, just like the Faber-Castell, I mean the Fabriano or the Canson pastel paper, this tooth picks up the color in a really interesting way. (pencil scratching) So I will now graze on top of that. Kind of orangy tone. Wax based, and orangy tone water based. And I'm trying not to mix the two because the water based, you can mix them but as soon as you add water, the wax based, the wax is not goin...