Go from Underestimated to Unstoppable

Go from Underestimated to Unstoppable with Jamie Kern Lima 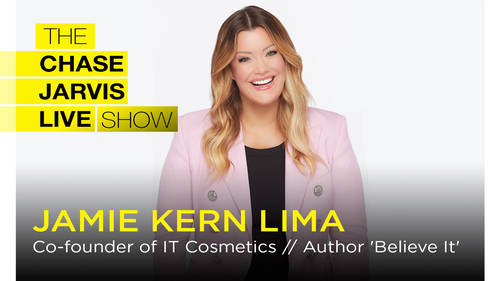 Go from Underestimated to Unstoppable

Go from Underestimated to Unstoppable with Jamie Kern Lima

Hey, buddy, what's up? Welcome to another episode of the Chase Jarvis Live show here on Creative Live. You know the show where I sit down with amazing humans and today's amazing human is Jamie Kern Lima. She's This is her book. The human is going to be coming up in just a second, but Jamey's story is incredible. This one time Ray Trist turned into a cosmetic mogul when she sold her company it cosmetics, for a billion plus dollars. That's right, a billion with a B. And today you get to hear her story with radical authenticity. Vulnerability. And if you've ever had self doubt, if you've ever needed a little extra Kurds to take some risks, especially in the face of a lot of people around you telling you what your big dream is is not going to work. This episode is for you, so I'm going to get out of the way and introduce again. Jamie Kern Lima. We're going to talk about a lot of things. Her story, her new book, Believe it and I know you're gonna love the show so I'll get underway. And here...

If you’ve ever doubted yourself or felt truly underestimated, this episode is for you.

Jamie Kern Lima is a self-made entrepreneur, champion of women, philanthropist, keynote speaker and Co-founder of IT Cosmetics, a company she started in her living room and sold to L’Oreal for $1.2 Billion, becoming the first female CEO in L’Oreal’s 100+ year history.

Her journey from growing her fledgling company from her living room to 1.2 Billion came with hard-won wisdom, having to overcome self-doubt, and sheer belief in her mission when she was told "“"No one is going to buy makeup from someone who has your body."

In this episode, we chat with Jamie about the lessons and breakthroughs that helped to tip the scales from countless Nos to Yes. Some of the topics we cover:

If you love this conversation, be sure to check out Jamie’s book BELIEVE IT filled with more actionable stories of how to go from underestimated to unstoppable.

Jamie Kern Lima is a self-made entrepreneur, champion of women, philanthropist, keynote speaker and Co-founder of IT Cosmetics, a company she started in her living room and sold to L&#8217;Oreal for $1.2 Billion, becoming the first female CEO in L&#8217;Oreal&#8217;s 100+ year history.
SEE INSTRUCTOR'S CLASSES