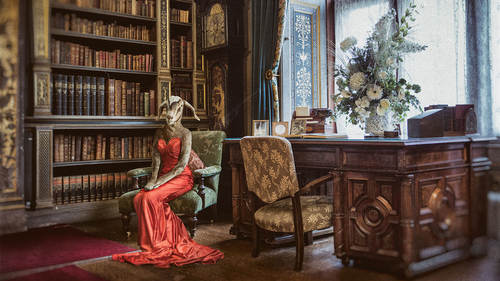 The one major thing that is in Lightroom CC that is not in Lightroom Classic is Sensei. So when I'm looking at Lightroom CC, so this is Lightroom CC, it's the much more simplified little brother, and I can search all of my photos and I can search for a woman in a hat. And there's a woman with a hat and there's a woman with a hat. So all of these women have hats. And then apparently, there's me. (audience laughter) So apparently, I mean I don't have hair, but anyway. So Sensei doesn't always get it right, but most of the time Sensei does, right? It knows that's a hat. It knows it's not actual horns apparently. Sensei does a pretty good job. I can find most photos this way. That is all based on machine learning. Looking at photos as a computer knowing what a hat looks like, knowing what a woman looks like. It's not that way in Lightroom Classic. Lightroom Classic only finds images based on the keywords that you put into it. If you are a Lightroom Classic user and that's all you wanna use...