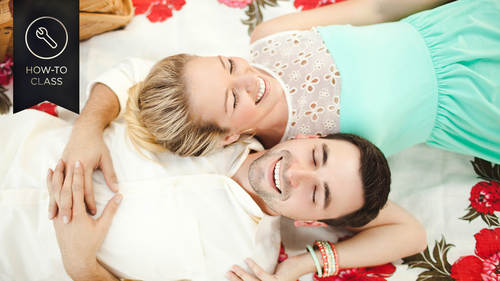 I've introduced myself a little bit first I'm a photographer and educator on living in l a just south of l a outside of the craziness on gay weddings and editorial work on but what I did was awesome in school job on outside of photography, I love nature campaign climbing, run around the wilderness, all that kind of stuff s o I actually pulled a couple of pictures from my phone, so you guys and get to know me a little bit better before we dig into everything. I'm a fan of friendliness, so we'll get friendly for a little bit so it's, my awesome wife and I on we were at the eagle river at a wedding a little while ago, I just want to show she's pretty on she's, the one on the right, she's not the bearded one just to clear that up. Thankfully, there, next up is my wife and kaya, one of our rescue cats. Um, so I'm probably more of a cat lady than most actual cat ladies, eh? So that's, why I'm showing some of these photos just taken gonna get to know that a little bit better and now you belie...

Learn how to define your photographic style, foster its progression, and build a brand that brings out the best in that style.

A clearly articulated brand helps you attract the kind of clients you genuinely enjoy working with. In How to Define your Style and Brand, Ben Sasso will help you evaluate your existing body of work to identify your style and coach you through the process of developing that style into a trustworthy brand.

This is the first course that I have gotten to watch on CreativeLive and I am very happy I chose to watch Ben's class first. He has been a photographer that I have followed for some time now on social media. Not only does this course provide A LOT of great information that I cannot wait to apply to my business and fine tuning my brand, but it helps put a face to the great photographer that Ben Sasso is. Thank you for taking the time to teach us!

Great information! As he grows and becomes more comfortable teaching (and he should keep teaching!) he would benefit from a little speech coaching. The sound, "aaahm.." is distracting because it's in the same deep, flatter tone. It's also one of the most challenging habits to break when delivering a speech/presentation, so I definitely can empathize. I do look forward to learning more from him, and seeing him grow as a presenter. In the meantime, I'll sit around with my cats and play the "Aaahm..." drinking game! Lol - seriously, great job!