Lesson 1 from: How to Paint with Light 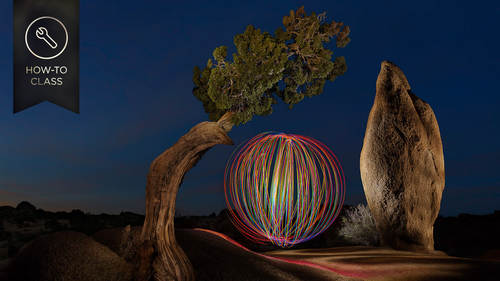 Lesson 1 from: How to Paint with Light

1. How to Paint with Light

So like painting if you haven't done like painting before it's quite a different process because we're gonna start off with a completely dark room with dark room we're going to use a portable light source in fact, I went tio walgreens last night and I bought a five dollars flashlight I'm gonna like the scene using that flashlight just to show you don't need fancy gear instead you can start with whatever it is you have and then on lee, if you start getting serious about it and you really get into it and really want to do it a lot, then you could start investing in more interesting gear that might let you do more, but I'll just when you know that you can start with something as simple as a five dollar light source s so we're gonna start with a completely black or dark room it doesn't have to be absolutely black, it just needs to be dark enough that you might not need to let your eyes adjust before you feel comfortable in the room, you might feel the need to knock things over otherwise an...

Ben comes though with great teachings as always. Nice job. If you ever have a chance to see one of his workshops its well worth the time and costs to go.

Wow! One of the best workshops I've seen on Creativelive! Lots of useful detail, easily understood. I've never done light painting but now feel that I can go forth and shoot with confidence -- Ben's lessons learned will really help me up the learning curve. Excellent!