How to Pose Family Portraits 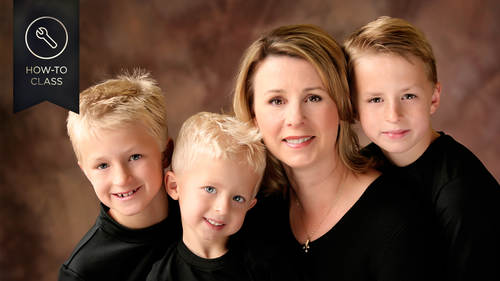 How to Pose Family Portraits

So with kids especially these ages, you'll hear my shutter click click click, click, click and somewhere in all of that madness is the one shot where everyone's looking at me and I'm not a big fan of swapping heads and all that I want to get my image straight in the camera so yes, you have a question so you get this shot and everybody's great except one will you go and post and then do a head swap? Or will you keep trying to shoot just to get it in camera it's so much faster for me to shoot it in camera than to go back and post later in the rare occasion that it happens, it can be done but why not just keep screaming like a lunatic and telling people to look at me so I actually get the image in the camera and I don't have to do that the five minutes I spend five minutes sound like an ape eyes five, ten minutes less I have to spend in post production, right? So I'd rather get it right in the camera but everybody's kind of everybody kind of has to be having a good time so that's, why it'...

Capture the magic of a family in a group portrait. In How to Pose Family Portraits, Michele Celentano will teach you how to take memorable family photographs of groups – sized 2 to 100. You’ll learn how to use bodies as puzzle pieces and how to position them together as Michelle poses and shoots a family of eight.

This ninety minute class will offer up fresh inspiration for your group portraits and completely change the way you photograph families of all sizes.

Fantastic! A noticed someones posing technique on a portrait and commented on it and they said to check out Michele Celentano on Creative Live.....well, I am so glad I did. This 90 minute video was jam packed full of great information on how to piece the puzzle of family posing. I learned a lot and can not wait to try these tips on my big family portrait session in 5 days time. I was panicking about this session, but now I feel I have a good understanding about the basics of family posing and how it is all just a puzzle that you slot the people in and create triangles, lines and how to make Mum look amazing! Thankyou :)

Amazing class! I would highly recommend anyone looking for more detailed and in-depth direction with family posing. Michele goes over how to start with a small group and build on to create large group portraits! She shows how to combine different family members to get a wide range of shots with more selection, which we all know translates into more potential profits in print and product sales. She demonstrates by posing a family on the floor, in chairs, and on a couch, using all age groups from 2 years old and up. I could spend an entire day listening to her! She does a great job explaining things and showing just how to do it. Great course, great video, great information! Thank you!

A good course on posing groups and families. It is good supplemental information if you've already studied some other posing courses. The only drawback for me is aspects of the photographers social interactions aren't to my liking (acting like a chimp and blowing raspberries). I will say though that she does have high energy and give compliments and talks with the subjects on things they like. That is what I would do on a shoot and she does that well. As for the posing it was macro level of fitting people together with a skimming of the minor details. It is a good condensed lesson and worth a watch.