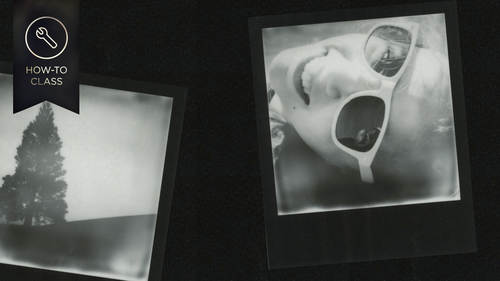 1. How to Shoot with Polaroid Show Transcript

Today we are shooting polaroids and I see some note pads that air out here put away your note pads this is the end we're done we're closing it down right you guys have learned everything s ceo how to shoot portrait's how to do all this stuff today it's you know how to do this I'm just going to turn you back onto it how many of you guys have shot with polaroids everybody's shot awesome command maybe never in your life awesome you're going to be shooting with one today and I'm gonna be taking pictures of everybody here so don't be afraid because we're going to have some fun I'm gonna turn you on to some new gear the big thing that I want you to walk away is that anybody can do this seriously that's what's so cool about instant film is that you know peter harley kicked off this amazing week you know saw him he saw that fancy gear right you're like yeah I want that dick you giga pixel you know whatever you know that thirty thousand dollars back I want that I can't afford that are you guys ...

Learn all about Polaroid® Photography from an inspiring and enthusiastic Polaroid®  photographer. In How to Shoot with Polaroid, Jonny Davenport will teach you the brief history of Polaroid, talk about how it is used today and introduce you the artists who are still shooting in this historic medium. You’ll look at a selection of cameras including the 800/110A, LandCamera, SX-70, 600 series camera and many more. Jonny will also teach you creative techniques you can use to enhance and share Polaroid photos in the digital age.

Jonny Davenport lives and breathes photography. He has been making photographs now for over 25 years. Jonny discovered photography in a ditch attempt to pass high school. His social media byline pretty much sums it up: @jonnydavenport -photogeek, lifelong hack.
SEE INSTRUCTOR'S CLASSES

This was the best photography class I ever seen!