Lesson 6 from: How to Create Collage Paper 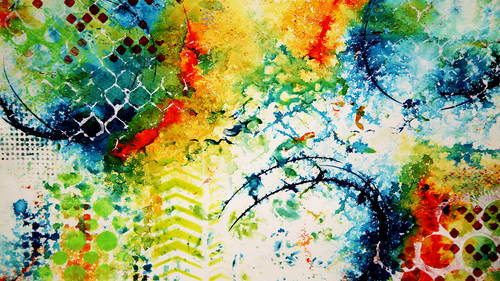 Lesson 6 from: How to Create Collage Paper

So we're going to start to think about how we want to layer up we've got a lot of these prince that we've started the layers on, but we want to add more layers because it really a very successful collage paper or background is not just one layer, not just to it's like three, four five I teach one class where I say this is this seven layer dip it's a seven layer art class, we do seven layers on this one piece, eh? So we're going to build up some layers over top of the pieces that we've already got started here and we're going to do that next by setting up a pallet if you want to take your palate paper out so I have my white out, but I'm also going to use some of the colored paints spot either or they both worked for this, so we did this on our jelly plate last time, but this time I'm just doing it straight on the palate and I'm gonna take my breyer and I'm gonna roll, ok? So here's here's a cool way to load your breyer without getting it all mixed. If I want to keep seeing the red in th...

Andrea Chebeleu is an artist and entrepreneur currently teaching mixed media, art journaling and jewelry classes in her San Jose art studio, A Work of Heart.  She began her business by creating custom scrapbooks for clients.  Soon the scope of the projects outgrew her home craft room necessitating a move to her first commercial space in 2002.  Over the years her crafty interests gained breadth and depth. She has a passion for helping others discover their creative gifts. Andrea's work can be found in Somerset Studio's Art Journaling and Jewelry Affair magazines.
SEE INSTRUCTOR'S CLASSES

As a proud father looking for ways to share good times with my kids, I'm glad to have found this course. I have tons of ideas that I can now capture on paper using a variety of tools. My plan is to take some time on Sundays to do only ART with my kiddos, especially on cold Winter days. The class is very informative, particularly in the items to get. Since this is new to me, I would not have any clue on what to buy, but Andrea gives you the ins and outs of what works and what doesn't ... a really good time/money saver. I highly recommend this course. Thanks CreativeLive !! You guys are awesome.

Wow, that was SO much fun! Lots of wonderful techniques I hadn't tried before.

This is a great beginner course and is loaded with creative and simple ideas. I love the fact that Andrea doesn't waste anything! She makes great suggestions for reusing items that would normally end up in the trash and she shows you simple ways to cut corners on your crafting supplies. This is about making collage paper, not a final work of art. I can't wait to get started trying out her ideas.

How to Create Collage Paper