Lesson 1 from: How to Find Your Purpose Through Grief and Loss 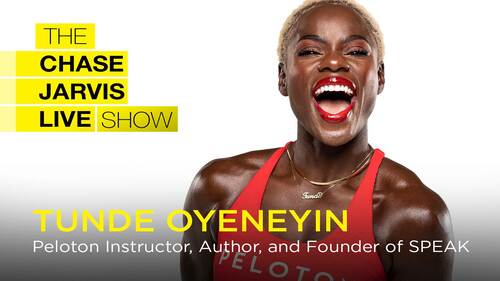 Lesson 1 from: How to Find Your Purpose Through Grief and Loss

1. How to Find Your Purpose Through Grief and Loss with Tunde Oyeneyin

you can show up and live every single day on repeat, wake up, shower, coffee, kiss the kids, go to work, come back, put the stuff down, eat watch tv go to bed, shower rinse wash repeat within all of that. Some anxieties, some worries, some questionings or you can be here and live here because we get to live here, we get to be here today, be here in purpose on purpose, move to the day purposefully and again, purpose is power. Power is your service. What's the thing that you do that when you're doing it, you feel most alive. Alright. That little snippet you heard was from tuned is one of the world's most popular peloton instructors. She's a face for revlon, she's a Nike athlete. She explains in this episode today how she moved from a life that was stricken with a lot of grief early on to the life of her dreams if you're interested in a new life for yourself. This episode is for you. They love you. Thank you so much for being on the show. We're grateful to have you here. Well, I'd love to...

This was so good. I've been in a complicated grieving process for about a year and a half. I needed to hear this. And she delivered with such authority. I'm taking note.