Lesson 3 from: How To Use Filters in Adobe Photoshop 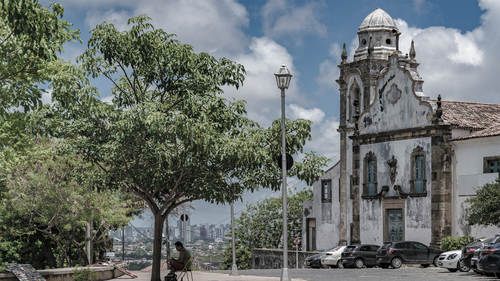 Lesson 3 from: How To Use Filters in Adobe Photoshop

All right. Then let's take an image here and I want your attention drawn to just one of these lions. If you've never been to Africa before, it's pretty crazy to be there and see these lions walking straight for ya, but I wanna, so I mainly see the guy in the foreground and then the ones in the background, there's just a hint of them, to do so, I'm gonna first convert this to a smart object. Then I'll go to the filter menu and I'm gonna come in here in choose blur gallery and that's where I'm gonna find a choice called tilt shift. When I have tilt shift, there's this little knob in the middle. I can click on it and drag this up or down. Then what this is gonna do is end up blurring my picture. You can see down at the bottom that this part's blurry already. Well, where that little dot is in the middle, there's a big ring around it and if I grab the ring and drag that controls how much blurring is applying. If you bring it way down, there'll be next to none. Bring it up and there'll be a ...

lot. Then there's a zone that stays sharp and that's the zone between the line right above this big dial and the one right below it. If i click on the dot in the center, I can move this around and I'm gonna move it so it's right down here where that guy is. It doesn't matter if you move it horizontally, but i'm moving it there. Just some thinking about that. Then if I want to make a wider area that is sharp, you can grab these lines. Just don't grab them where the dot is. Here, there's a blue dot that would allow you to rotate it. Instead, move further out and you can grab either line and pull on it to define what range should be sharp in your picture. Then if you look above the upper horizontal line and keep going, you're going to find a dash line. The space between the solid line and the dash line is where the sharpness is going to start fading out and once it gets to the dash line it's going to get the full force of the blurring you're requesting so I can click on that dash line and drag it to decide how abruptly should this fade out and I'm gonna make it fade so it goes right down to about the paws on that second lion that's there. There's also a dash line on the bottom edge too. If I had this moved up far enough so you could see it, but i'm just having a little bit of blurring happening there. Then i can dial my big dial here to decide exactly how much blurring I want in that background. To really get your attention to come to this area. But you still know there are other lions in the background. Now when I ended up dialing the big dial, all it's really doing is changing a setting that's found on the right side of my screen that is called 'blur' and so you're more than welcome to change it over there as well. If you ever blur something, you gotta be careful because a lot of images will have noise or grain in them and as you blur something you throw away that grain cause it gets blended in to the image. So down here at the bottom there's a tab called noise. And this is going to apply to the area that's been blurred. So you might want to zoom up on your picture. This image I think might've been shot at ISO and that means there's probably a bit of noise in the sharp area of the picture. Well if I wanna add noise back to those areas that's been blurred. Here I can adjust the amount and if you watch the top portion of my screen, i can see it getting noisy. I wanna just try to make it look like it blends in with the sharp area. So maybe around there, I'm not sure how well you'll see that on video cause videos compressed and therefore it doesn't always pick up the finest of details here we can choose the size of the noise. So we have larger pieces or really fine ones. And again that's trying to match the quality of the rest of the picture and how rough or random those specks of noise are or how consistent if you lower it. Then also in those two varieties of noise. There's luminance noise which is a difference in brightness and then there's also color noise, which is where you'll see some variation in color. If the sharp part of your picture you can see it varies in color in a way that you don't think is part of the original scene that was being photographed. Instead as noise, you could bring up this slider for color. Finally, there is a slider for highlights. I don't know if we'll notice it in this particular image, but, noises is mainly gonna be in the darker areas of your picture, especially if you brighten those darker areas and here I can choose how much of it is applied to the highlights so I could back off on it in the highlights. Then up here at the top, all you gotta do is click okay. And now if I turn off the blur gallery filter, you can see the sharpness in the background versus that little slice where we're just trying to get your attention on one object. If you do this, to what would usually be a huge scene like a city? It actually makes it feel like a miniature set because you usually can't get a soft background like that. When you shoot with a wide angle lens. In an order to take a picture of a city and get the whole city in, you usually need a wide angle lens. With a wide angle lens, you just not gonna get the blurry background. The only time your brain is used to seeing a blurry background in knowing that it's real is when you see something under a microscope or a magnifying glass. Usually you get a very limited depth of field. And so when you suddenly see a cityscape and you've applied this to it to get just a narrow range of sharpness, your brain doesn't know why, but it thinks it looks like it's miniature, and that's because you're not used to seeing shallow depth of field with a wide angle lens.

Great class. Clear instruction. (There is a typo, however, on the title of the last section where it should say combining, not combing.)