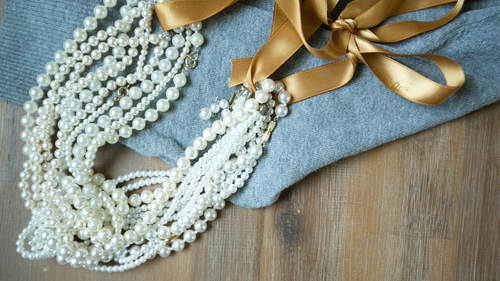 So another thing that I like to do, a costume jewelry, that's really fun is so it onto fabric, and I want to show you a couple things that I've made with costume jewelry. This is a pillow and the sister tive those mandala designs, and I'm talking about where they just sort of start in the center, very meditative little symbols. So this pillow was just a pillow cover that I had made with what you see here except the button. I used the button in her charm bracelet. So so as you can see, I bought these at the thrift store and that's what you have and it's so easy, tio. So these things would be so fun for, like, a teenage girl's bedroom, or even for girls to do themselves like he could do your initial things like that on the fabric here's another example of just jewels sewn onto a little piece of ribbon. And this is actually in my book, and I thought this would be so cute for, like, a flower girl bracelet or something like that. It's just a little bit of shiny for them to have, and then yo...