Imposter Syndrome, Getting Unstuck and The Practice 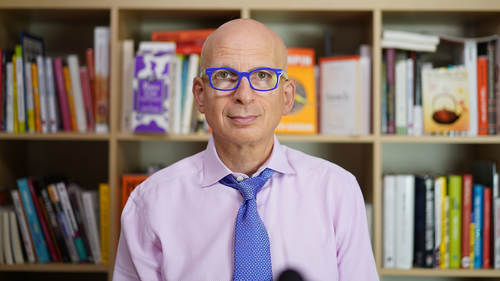 Imposter Syndrome, Getting Unstuck and The Practice

Hey, buddy, what's up? It's Chase. Welcome to another episode of the Chase Jarvis Live show here on CREATIVELIVE. You know the show. This is where I sit down with the world's top creators, entrepreneurs and thought leaders, and I do everything I can in my power toe unpack their brains with the goal of helping you live your dreams and career and hobby and in life. My guest today is a very special man. He has been on the show before. We are lucky to call him a close friend of the family. And, of course, he's in his 19 bestselling books. He's written about everything from the Internet to marketing. He's in the Marketing Hall of Fame, the Direct Marketing Hall of Fame, the Guerrilla Marketing Hall of Fame. I don't know. There's so many marketing hall of fames. He is a legend to say the least bestselling books and been on the show before. But we're here today to talk about Mr Talk with Rather Mr Seth Godin and about his newest book called The Practice, which to me is long overdue specifica...

For the last 30 years, Seth Godin has been turning on the lights for millions of people (myself included) through his blog, online courses, lectures, and 19 best-selling books. Yes- 19! If you’ve been following his work, you’ll know he’s one most brilliant marketing minds of our time. Now he’s out with his 20th book, The Practice: Shipping Creative Work.

If you’ve been listening to this podcast for awhile, you’ll know I’m a huge believer in nurturing a creative practice. So often we sit around wondering why we are stuck, why we lack inspiration or are simply avoiding getting started. The secret? A steady, regular and brave practice that will keep you creating, even through the muck. It’s working through those bad ideas and mediocre creations, that get you to your greatest work.

We cover a lot of ground in the episode and I’m excited for you to dig in. Some topics include: