Lesson 15 from: Infographic Elements from Scratch in Illustrator 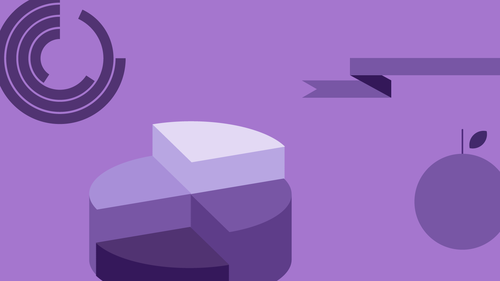 Lesson 15 from: Infographic Elements from Scratch in Illustrator

How to Use Corner Widgets

Get Creative with Shapes

How to Create a Dotted Line

How to Segment a Circle

How to Create a Slip Shadow

Combine Multiple Elements into One Graphic

How to Make Graphics 3D

We are going to work with creating shapes using the Pathfinder Panel, which you're going to find under the Window menu, and here is our Pathfinder Panel. Now, the previous two sessions, we've just been working with normal shapes and just manipulating the shapes in order to get all of our infographics, or all of our icons here, which we've got a pretty good collection of right here. But we're gonna go and we're gonna jump into the actual building of the shapes here. And we have somebody here in the audience who'd like to add something. So I have a question. So I have a beauty business, and so I make soaps and just makeup products. So is there a way that we could possibly, maybe make something with lipstick or, in that Absolutely. Or make a graphic like that? Thank you. We can create absolutely anything. So we're gonna kind of, like throw that in there in this whole session. So we're gonna come up with some cool things there. Absolutely. So, using the basic shapes, and manipulati...

This class is so much fun! I gobbled it up because I enjoyed every minute. It begins my journey into infographics, something I intend to put in my portfolio. Jason Hoppe is a great instructor who really knows his stuff. If you want to have fun with Illustrator, this is the class for you!

I bought the first version of the course of Infographics and I strongly recommend it to anyone who wants to learn how to use Illustrator. Exactly as he explains in the video, this is not a course just to learn how to make graphics. At the end of the course you will be able to develop just about anything in Illustrator. Really! All the knowledge I have today of this tool, started from this course of Infographics to which he refers. Not only the content is comprehensive, but Jason is a great teacher, explaining everything very, very simply. I'm looking forward to watching this update.

Jason, you ROCK! I learned a lot of things during this class. Thank you for being such a great teacher and taking time to share your knowledge. Will continue to purchase your classes. Sandra