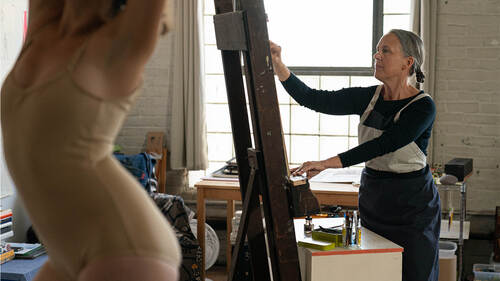 Add backbone to your sketch with secondary curvature and explore why it’s crucial to establish the relationship between head, torso, and pelvis.
Show Transcript

So once we've established this really like core understanding or feeling really of essential gesture and started to talk about structure, how that structure of the joints, how that relates in a dynamic way to what that core energy is doing. We might be tempted to start and work with adding some very simple volumes to our drawings. So rather than just the five line drawing or the constellation drawing with the structure between the joints, we could start to work in an oval for the head, the torso and the pelvis and how that might attach to those lines. So we already took a look at this idea of plotting the points and how that relates to structure. But you can see that that linear structure, you can also start to create very simple volumes attached to that to start to fill out the body. So, I've made this little sculpture which is really, I like to think about it as beads on a wire and to think about taking uh the head and the torso and the pelvis and thinking thinking of them like stron...