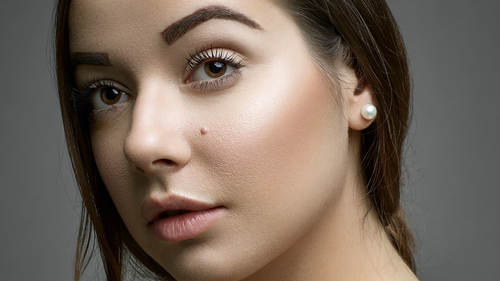 I wanna talk about the area under the eye, and I wanna talk about color theory a little bit. Because these brushes have a really powerful option, and that's the color overlay for these brushes. You can add any color to any brush that you have which is awesome, okay. If you wanna create blue eyes on a green eyed person, you can do that because you can add blue color to this brush. I'm gonna get really advanced in the next couple of sections, which, and we can talk a little bit more about that color. Color is important to kind of understand as we move forward. So the area underneath the eyes, when it comes to under eyes, there's something that happens with the blood capillaries, the capillaries under the eyes. The skin under the eyes is much thinner than the rest of the skin on the face. So what happens is, sometimes if people aren't very well slept, like I am right now 'cause I have an eight month old, you end up with blood, oxygenated blood that's pooled under the eyes. That is blue in...

If you want to be a financially successful photographer, you need to use every second you have as wisely as possible. That means you don’t have two hours to spend retouching a single image in Adobe® Photoshop®. Fortunately, there’s Adobe® Lightroom®, which offers so many amazing tools you can skip Photoshop altogether. In this class, Kristina Sherk will show you all the incredible portrait retouching you can do in Lightroom in just seconds, which is great news for your bottom line.

This is an excellent class. I have covered over half of BenWilmore's complete guide to Lightroom, which I needed as I have mostly played around with the obvious sliders in Lightroom until now. So fortunately I had a little familiarity with brushes. This is so helpful for me to now use what I learned with more detail and more skills specifically for portraits of my family. I am so excited to use all this! Thanks!!!! She is an excellent teacher.

I very much appreciated Kristina's energy and concise instruction. She was very easy to follow and remained focused on each lesson without being repetitive or random. I learned great time saving tips that will not be difficult to implement. Thank you, Kristina!

This was a fantastic, easy to follow course! So glad I took it!!!