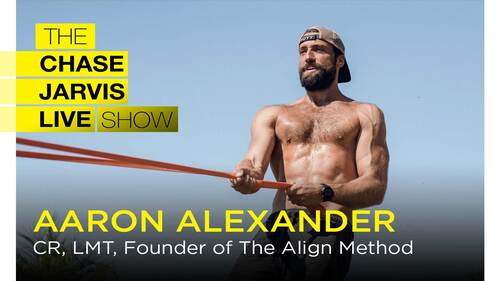 what if I told you that we are always under construction, are physical bodies are all what we're doing right now is setting us up for the body we will inhabit in the next moment? That is one of the philosophies of this week's guest here on the Chase drivers live show on Creativelive. The guest is Aaron alexander. Now if you're familiar with Aaron's work, you're going to be excited for this and if you're not familiar, I have to tell you, I think you're in for some new thinking. Aaron is a manual therapist, he's a movement coach, he's an author and the host of an amazing podcast I love called the Aligned podcast, Aaron takes practices from cultures all over the world. He's gathered these ideas and insights past podcast guests, his travel to understand that we have the ability to integrate movement into our daily lives even more so the healthiest populations in the world, they actually don't come from jim culture. So if you, you know, shudder at the thought of having to go to the gym thre...