Skip to main content
Photo & Video > Macro > Macro Photography: Insects And Plant Life > How To Get The Shot

How to Get the Shot 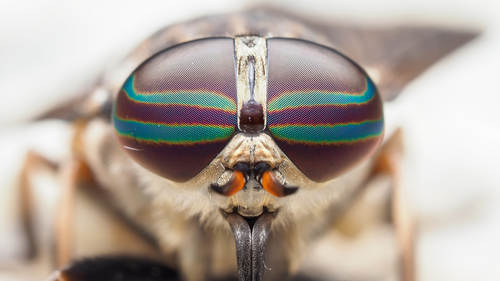 Macro > Macro Photography: Insects And Plant Life > How To Get The Shot

11. How to Get the Shot Show Transcript

How to Get the Shot

So, now I'm going to shoot some water droplets. It just rained here, lot of water on this plant, all sorts of different types of droplets. We have some water collected on the top of leaves, some that's dripping off of leaves. And the easiest way to shoot water droplets is just to use the natural light. You get light shining through the droplet, reflecting off the droplet. And now you can use your Live View. I turn Live View Boost off, so I get an actual indication of my exposure on the LCD or in my electronic viewfinder. And basically, whatever I see in the viewfinder is what I'm going to capture. So it's much simpler. It's just a matter of framing the shot with a composition that you like and clicking the shutter button when your subject's in focus the way you like it. This is the kind of opportunity where we wanna play with our depth of field a little bit. So, currently, I'm set up at 125th of a second. My ISO is at 400, and F/3.5, I might go down to 2.8. I really only want the edge ...

Take a closer look in this beginner’s guide to macro photography and insect photography. Chris McGinnis, will dive into the world of macro photography from understanding what it is to how to shoot it. He’ll explain how to search and capture a smaller world with just the use of your camera. He’ll dive into the behaviors of insects and their relationships to plant life so that you can capture amazing images from your backyard to national parks.

Chris McGinnis is a graphic designer, photographer, and macro photography enthusiast based in Bethlehem, Pennsylvania. He obtained his degree in graphic design from Moravian College and, after a stint in the publishing world, joined the creative department at Olympus America. Chris currently works as the Senior Manager of Creative Services and oversees all phases of Olympus’ graphic design, photography, and video production. When he purchased an OM-D E-M10 in 2014, Chris vowed to shoot (and share) at least one photo each day for an entire year. After 365 days shooting, sharing, and learning, he found himself more and more interested in the details. He bought a macro lens and has never looked back. As Chris ventured deeper into the world of macro, he soon shifted his efforts toward featuring the beauty, design, and intricacy of arthropods which often go unnoticed.

Chris McGinnis is a graphic designer, photographer, and macro photography enthusiast based in Bethlehem, Pennsylvania. He obtained his degree in graphic design from Moravian College and, after a stint in the publishing world, joined the creative department at Olympus America.&#160;
SEE INSTRUCTOR'S CLASSES

I found the class both very informative and very motivational to get started in Macro photography. It is an entry-level class but it explains what you really need to know to be successful. I especially found the information on the value of using flash and how to modify your flash for it to be more effective especially helpful. I am an experienced wildlife photographer and have done some "Macro" with my telephoto lens, but this class motivated me to purchase a dedicated lens. I am really looking forward to spring and finding some good bugs!

Great presentation and great motivation in the post processing. I do wish that the would have been made available. After all, this is a Olympus sponsored event, and Oly settings are always welcomed.... and a tad difficult on the learning curve.

Chris does a commendable job of explaining his techniques, reasons and potential pitfalls to avoid. Very thorough and much more enthusiastic about little bugs than I will ever be :-) but at the end one has a good concept on how to approach the task at hand. Nice closing with his practical examples of 'post' shoot production. One suggestion for inclusion would be some operating tips/techniques with a tripod/macro rail slider. His Olympus is way smaller/lighter than my Canon 5D so my hand holding will be at a minimum. Well done. Thank you